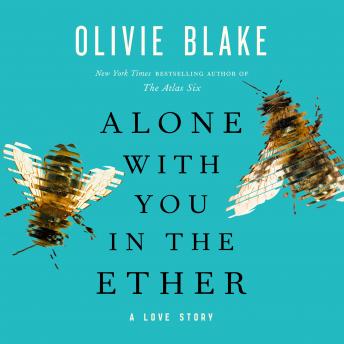 Alone with You in the Ether: A Love Story

Narrated primarily by Robb Moreira and Sura Siu, this program features a cast of cameos, including one from the author.

From Olivie Blake, the New York Times bestselling author of The Atlas Six, comes an intimate and contemporary study of time, space, and the nature of love. Alone with You in the Ether explores what it means to be unwell, and how to face the fractures of yourself and still love as if you're not broken.

CHICAGO, SOMETIME—
Two people meet in the Art Institute by chance. Prior to their encounter, he is a doctoral student who manages his destructive thoughts with compulsive calculations about time travel; she is a bipolar counterfeit artist, undergoing court-ordered psychotherapy. By the end of the story, these things will still be true. But this is not a story about endings.

For Regan, people are predictable and tedious, including and perhaps especially herself. She copes with the dreariness of existence by living impulsively, imagining a new, alternate timeline being created in the wake of every rash decision.

To Aldo, the world feels disturbingly chaotic. He gets through his days by erecting a wall of routine: a backbeat of rules and formulas that keep him going. Without them, the entire framework of his existence would collapse.

For Regan and Aldo, life has been a matter of resigning themselves to the blueprints of inevitability—until the two meet. Could six conversations with a stranger be the variable that shakes up the entire simulation?