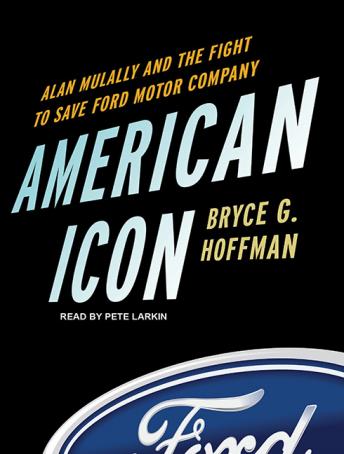 American Icon: Alan Mulally and the Fight to Save Ford Motor Company

At the end of 2008, Ford Motor Company was just months away from running out of cash. With the auto industry careening toward ruin, Congress offered all three Detroit automakers a bailout. General Motors and Chrysler grabbed the taxpayer lifeline, but Ford decided to save itself. Under the leadership of charismatic CEO Alan Mulally, Ford had already put together a bold plan to unify its divided global operations, transform its lackluster product lineup, and overcome a dys-functional culture of infighting, backstabbing, and excuses. It was an extraordinary risk, but it was the only way the Ford family-America's last great industrial dynasty-could hold on to their company. Mulally and his team pulled off one of the great-est comebacks in business history. As the rest of Detroit collapsed, Ford went from the brink of bankruptcy to being the most profitable automaker in the world. American Icon is the compelling, behind-the-scenes account of that epic turnaround. On the verge of collapse, Ford went outside the auto industry and recruited Mulally-the man who had already saved Boeing from the deathblow of 9/11-to lead a sweeping restructuring of a company that had been unable to overcome decades of mismanage-ment and denial. Mulally applied the principles he developed at Boeing to streamline Ford's inefficient operations, force its fractious executives to work together as a team, and spark a product renaissance in Dearborn. He also convinced the United Auto Workers to join his fight for the soul of American manufacturing. Bryce Hoffman reveals the untold story of the covert meetings with UAW leaders that led to a game-changing contract, Bill Ford's battle to hold the Ford family together when many were ready to cash in their stock and write off the company, and the secret alliance with Toyota and Honda that helped prop up the Amer-ican automotive supply base. In one of the great management narratives of our time, Hoffman puts the reader inside the boardroom as Mulally uses his celebrated Business Plan Review meet-ings to drive change and force Ford to deal with the painful realities of the American auto industry. Hoffman was granted unprecedented access to Ford's top executives and top-secret company documents. He spent countless hours with Alan Mulally, Bill Ford, the Ford family, former executives, labor leaders, and company directors. In the bestselling tradition of Too Big to Fail and The Big Short, American Icon is narrative nonfiction at its vivid and colorful best.

This is a very intriguing story that offers a look inside the management of Ford Motor Company. It is a very inspiring true story where a gigantic ship is turned around in the midst of seemingly impossible circumstances. Not only does the book give a look into the Ford Motor Company and the rest of the Detroit automotive industry, but it brings to light how the automotive industry is woven into the fabric of America, and subsequently the world. Through the leadership of one man, then one team, then "One Ford" an incredible turn-around story unfolds about how Ford is saved from the brink of collapse - saving itself, and the automotive industry as well. Mr. Hoffman has managed to tell an extraordinary story, extraordinarily well. Full of candor and quotes from Mr. Ford himself, "American Icon" is a fantastic read, about a fantastic comeback story, that should be read and shared for generations to come...

This was an interesting read about the inside of FMC - how it works, the personalities involved, and decisions made. From afar, I was impressed with Bill Ford Jr's decision to step down and bring in Alan Mulally. But I didn't realize how bad FMC was being run. If you enjoy learning about how large organizations work, and how their leaders actually lead, this is a great book. The narration was very good, also, with an excellent understanding of where tempo and emotion need to be displayed.

This is a amazing story of how a transmundane thinking CEO used logic and rational thought to change a American business culture to save one of the industries that our country depended on.

A very captivating listen! I found it nearly impossible to pause when I needed to stop for a restaurant or fuel.

I remember the news reporting on much of what Alan Mulally was doing during his career with Ford. The book went into the details of why and how. I totally enjoyed relearning what makes great leaders within a company. The narrator I swear never took a breath but he kept me listening. I would recommend this to a student studying project development. It had lots of ideas for projects within a company.

Reading this at least a dozen years after the events covered in the book, does not diminish the power of what Mulally accomplished at Ford. Indeed, maybe, with the perspective of time, what he and the Ford team achieved seem even more impressive today.

This title is due for release on June 4, 2012
We'll send you an email as soon as it is available!