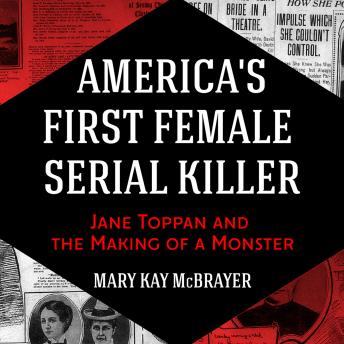 America's First Female Serial Killer: Jane Toppan and the Making of a Monster

This book is for listeners of true crime podcasts and readers of both fiction and true-crime nonfiction. It is for watchers of television shows like Deadly Women and Mindhunter who are fascinated by how killers are made. It’s for self-conscious feminists, Americans trying to bootstrap themselves into success, and anyone who loves a vigilante beatdown, especially one gone off the rails.

It’s the true story of first-generation Irish-American nurse Jane Toppan, born as Honora Kelley. Because even though all the facts are intact, books about her life and her crimes are all facts and no story. Jane Toppan was absolutely a monster, but she did not start out that way.

When Jane was a young child, her father abandoned her and her sister to the Boston Female Asylum. From there, Jane was indentured to a wealthy family who changed her name, never adopted her, wrote her out of the will, and essentially taught her to hate herself. Jilted at the altar, Jane became a nurse and took control of her life—and the lives of her victims.

This title is due for release on May 19, 2020
We'll send you an email as soon as it is available!