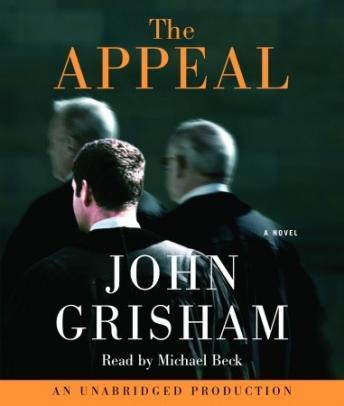 The Appeal: A Novel

In a crowded courtroom in Mississippi, a jury returns a shocking verdict against a chemical company accused of dumping toxic waste into a small town’s water supply, causing the worst “cancer cluster” in history. The company appeals to the Mississippi Supreme Court, whose nine justices will one day either approve the verdict or reverse it.
Who are the nine? How will they vote? Can one be replaced before the case is ultimately decided?

The chemical company is owned by a Wall Street predator named Carl Trudeau, and Mr. Trudeau is convinced the Court is not friendly enough. With judicial elections looming, he decides to try to purchase himself a seat on the Court. The cost is a few million dollars, a drop in the bucket for a billionaire like Mr. Trudeau. Through an intricate web of conspiracy and deceit, his political operatives recruit a young, unsuspecting candidate. They finance him, manipulate him, market him, and mold him into a potential Supreme Court justice. Their Supreme Court justice.

The Appeal is a powerful, timely, and shocking story of political and legal intrigue, a story that will leave listeners unable to think about our electoral process or judicial system in quite the same way ever again.

"... a story that will leave listeners unable to think about our electoral process or judicial system in quite the same way ever again." Absolutely right. If you want a feel-good ending then try the Pelican Brief or one of the other Grisham novels. This one is brilliantly narrated, and well written; but that's part of the problem: you can't believe what you are hearing because it is so plausible and frightening. Get the unabridged version for the full impact and detail. Unfortunately the download file has some details missing, like the name of the author, so each CD gets a random author number, instead of the author's name. Sloppy. Fortunately it doesn't interfere with the genius of this novel.

I found this story to be both edifying and a very satisfying "listen." It is also extremely upsetting, particularly during these times, because it shows exactly how the politics of this country work - which is basically on greed. When politicians value their own wealth and power over the needs of the man in the street, then democracy has failed. And in this book, Grisham shows just how badly diseased American politics has become. The story is more prescient now than when it was written. It isn't often that I wish a book be made into a movie, but I do feel that Grisham's "The Appeal" should be. Its story and message need to be seen by as many people as possible, on both sides of the political divide. The narration was also first-class.

I enjoyed the first few chapters because I feel as though they were the lead-in to something exciting. As time went on, the many main characters were naive for too long. Also, I definitely did not like the ending. I had at least three other endings in mind. Therefore, I agree with the 4 star rating.

This title is due for release on January 29, 2008
We'll send you an email as soon as it is available!