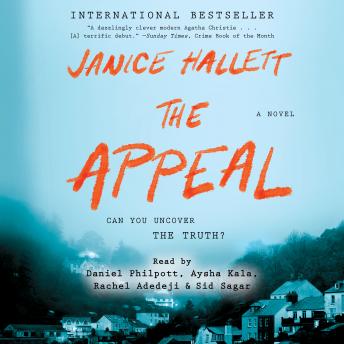 The Appeal: A Novel

INTERNATIONAL BESTSELLER
Named a Best Book of 2022 by The New York Times, Air Mail, and more!

Perfect for fans of Ruth Ware and Lisa Jewell, this international bestseller and “dazzlingly clever” (The Sunday Times, London) murder mystery follows a community rallying around a sick child—but when escalating lies lead to a dead body, everyone is a suspect.

The Fairway Players, a local theatre group, is in the midst of rehearsals when tragedy strikes the family of director Martin Hayward and his wife Helen, the play’s star. Their young granddaughter has been diagnosed with a rare form of cancer, and with an experimental treatment costing a tremendous sum, their castmates rally to raise the money to give her a chance at survival.

But not everybody is convinced of the experimental treatment’s efficacy—nor of the good intentions of those involved. As tension grows within the community, things come to a shocking head at the explosive dress rehearsal. The next day, a dead body is found, and soon, an arrest is made. In the run-up to the trial, two young lawyers sift through the material—emails, messages, letters—with a growing suspicion that the killer may be hiding in plain sight. The evidence is all there, between the lines, waiting to be uncovered.

A wholly modern and gripping take on the epistolary novel, The Appeal is a “daring…clever, and funny” (The Times, London) debut for fans of Richard Osman and Lucy Foley.

Could not finish. Sorry.

This title is due for release on January 25, 2022
We'll send you an email as soon as it is available!