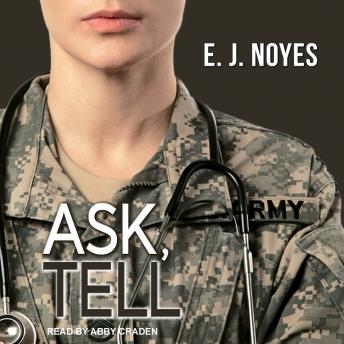 Captain Sabine Fleischer is a skilled and dedicated U.S. Army surgeon deployed to a combat hospital in Afghanistan. She is also one of the thousands of troops who are forced to serve in silence because of the military's anti-gay policy of 'Don't Ask, Don't Tell (DADT).'

Usually driven and focused, Sabine finds that battles raging both inside and outside the perimeter walls are making it more and more difficult for her to deal with her emotions. Dealing with loss and mortality, lack of privacy, sleep deprivation, loneliness, and the isolation forced on her by 'Don't Ask, Don't Tell' are all taking their toll. Plus, her long-term relationship with a civilian back home is quickly becoming another casualty of war.

Colonel Rebecca Keane is an enigmatic career officer who runs the surgical unit like clockwork. Well liked and respected by those who work with and under her, she walks a fine line to preserve the military's chain of command while connecting with those under her care and supervision. Sabine knows the Colonel is way off-limits, but can't help fantasizing about her. Especially when she starts picking up unspoken cues-a stolen glance, a secret smile, an 'accidental' brush of hands. Or is it just wishful thinking? After all, Rebecca's wedding ring shines almost as brightly as her deep blue eyes . . .

Enjoyed the story and the characters! I’d recommend it to anyone who like this genre, but found it particularly eye-opening for LGBTQ partners of military. It’s a nice reminder of how far we’ve actually come in the US since “don’t ask don’t tell.”

Ultimate favorite series. The books are hypnotizing and the narration a thing of beauty. Rebecca Keane is unparalleled and getting to know her through Sabine’s eyes? Swoon worthy. Noyes and Craden are the dream team.

Probably one of the best books of this genre I’ve read. There were points that I couldn’t stop listening to it. The narrator was fantastic, really added an additional dimension to it. I was gutted when the book was over, and can highly recommend the rest of the series too.

What an amazing book an narration!

Fabulous exploration of the tension of military service.

The plot can stall at times but otherwise a great read. I started the series with the main characters sister so a little backwards so it is nice to have filler for the things that I wasn’t sure about prior.

This title is due for release on June 11, 2019
We'll send you an email as soon as it is available!