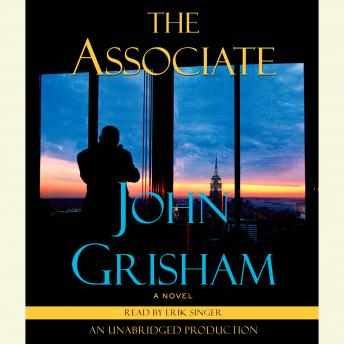 The Associate: A Novel

#1 NEW YORK TIMES BEST SELLER • If you thought Mitch McDeere was in trouble in The Firm, wait until you meet Kyle McAvoy, The Associate

Kyle McAvoy grew up in his father’s small-town law office in York, Pennsylvania. He excelled in college, was elected editor-in-chief of The Yale Law Journal, and his future has limitless potential.

But Kyle has a secret, a dark one, an episode from college that he has tried to forget. The secret, though, falls into the hands of the wrong people, and Kyle is forced to take a job he doesn’ t want—even though it’s a job most law students can only dream about.

Three months after leaving Yale, Kyle becomes an associate at the largest law firm in the world, where, in addition to practicing law, he is expected to lie, steal, and take part in a scheme that could send him to prison, if not get him killed.

With an unforgettable cast of characters and villains—from Baxter Tate, a drug-addled trust fund kid and possible rapist, to Dale, a pretty but seemingly quiet former math teacher who shares Kyle’s “cubicle” at the law firm, to two of the most powerful and fiercely competitive defense contractors in the country—and featuring all the twists and turns that have made John Grisham the most popular storyteller in the world, The Associate is vintage Grisham.

Story started off well and kept me interested. Excellent story line. Loved it till the end.

Good story that moves along well with a good amount of suspense and thrill. It lacks snap at the end though, like so many of Grisham's books.

This book started out pretty good and if you didn't ask too many questions and just went along for the ride it was a good time, until the end. There was a lot of build for a hugely dissapointing ending. Because the end made me regret bothering with the book at all, I can give the whole thing only 2 stars.

I would have preferred some sort of surprise ending. It was too predictable and seedier than earlier works.

I love Grisham books (and so does my husband) ... we listened to this book on a trip we took and were instantly hooked. We couldn't wait to see how it would end only to be disappointed. Up to the end though we really enjoyed the book (I would have just had a different ending).

Typical Grisham. The usual twists and turns. Loved it.

This was like The Firm only with a different main character and a worse ending. I kept waiting for it to pick up and get thrilling, like the thriller is it supposed to be, but it never happened.

Story was just OK but the ending was a huge disappointment.

I have been waiting for John to go back to his earlier style in the manner of The Firm and The Pelican Brief. I enjoyed his earlier books because they gave you a peek into the inner workings of the world of a lawyer, while providing some intrigue and suspense. The Associate has all of those elements. My only criticism is that I would have like a few more twists and turns, but all in all, it was a good book.

As a Grisham fan I was disappointed. An unbelievable plot which never reaches a conclusion. The so called conclusion left you hanging. I hope Grisham gets back on track and doesn't try to live on his name alone.

This book has an incredibly lame premise. There are so many holes in the plot it's like a sponge. Rent something else.

Not up to Grisham standard. Lead character was not believable.

Not Grisham's best, but definitely worth renting!

I gave this book two stars which was a generous rating... I gave it a big two stars since I did finish the book but it was not up to par for such a great mystery/legal fiction writer.

As a big Grisham fan I was deeply disappointed. A lot of filler language trying to build an absolutely unbelievable plot which after long miserable hours of listening never reaches a conclusion. Let's hope John gets back on track and doesn't keep trying to live on his name alone

I won't spoil the ending. After all, what's a thriller when you already know the ending? The story is interesting, although some of the characters remain cardboard cut-outs of real people because you never really get to see who they are. But that's part of the problem: the associate is so busy working he has barely enough time to think out his predicament, let alone the people around him. Workaholics take note! But I started to realize around 3/4 of the book that the story was going to resolve itself quickly. Unfortunately the dramatic option didn't materialize. So if you read novels to find out what happens, and never to enjoy the journey along the way, then this book will be a disappointment. I enjoyed the story each step of the way, so a lame but happy ending wasn't a problem.

This title is due for release on January 27, 2009
We'll send you an email as soon as it is available!