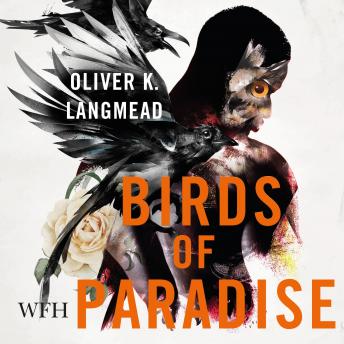 American Gods meets The Chronicles of Narnia in this adult fantasy about the Biblical Adam recovering the lost pieces of the Garden of Eden.

Many millennia after the fall of Eden, Adam, the first man in creation, still walks the Earth - exhausted by the endless death and destruction, he is a shadow of his former hope and glory. And he is not the only one. The Garden was deconstructed, its pieces scattered across the world and its inhabitants condemned to live out immortal lives, hiding in plain sight from generations of mankind.

But now pieces of the Garden are turning up on the Earth. After centuries of loneliness, Adam, haunted by the golden time at the beginning of Creation, is determined to save the pieces of his long lost home. With the help of enlisting Eden's undying exiles, he must stop Eden becoming the plaything of mankind.

Adam journeys across America and the British Isles with Magpie, Owl, and other animals, gathering the scattered pieces of Paradise. As the country floods once more, Adam must risk it all to rescue his friends and his home - because rescuing rebuilding the Garden might be the key to rebuilding his life.

"Birds of Paradise sits in a place between Plato and John Wick, a place which frankly I didn t know existed. And it is profoundly human too: whoever has ever known loss will resonate with it." FRANCESCO DIMITRI

A masterfully written beautiful story. I wouldn't mind coming back around to listen to it again.

Oh what a strange story. I enjoy the ‚out of the ordinary‘ , so this story fascinated me and piqued my imagination. I thought it would go on forever, but then it ended.

Let’s put out there that this is a pure fantastical story - ok with that said… this is the most unusual book I have ever read! I could not stop listening. I was completely captivated by the story line. The author, Oliver Langmead is brilliant. Honestly I don’t know how he was able to weave as much detail into such an unforgettable story. My only complaint with the entire book was my annoyance with Adam’s voice.

I found the book unusual, unique, and interesting. No emotional masterpiece, but while it was different, I wanted to listen to it, I happily listened until the end, and it was worth the purchase. It will be a book that I won’t forget.

Chaotic and hard to follow. Enjoyed the narrators voice.

I did not enjoy this book. It was just plain weird. I had found the description intriguing, but soon discovered that it went in very different direction. I didn't think the characters were very well developed and the plot was lacking in motive. The story twists the author tried to pull off were weak. The narator was the only reason I finished this book.

The story built a fascinating world peopled by the characters of Eden. The characters were a bit 1-sided, but the pietic style of the writing kept me engaged.

Listener beware. If you thought like I did from the synopsis that this would be a quiet story of self discovery and redemption with found family you will be sorely mistaken, and will not enjoy this ride. Adam commits brutal, nearly unprovoked murder in the very first chapter, and continues that trend throughout. His methods of problem solving are in order: murder, mass murder, breaking and entering, theft and murder, mass murder, and finally a horrific revenge fueled torture execution where he eschews guns as they "aren't cruel enough" and intentionally keeps his quarry alive as long as possible during the process to increase his suffering. Just walk away from this one. There's no God left here.

I applaud the author for a great story! And, the narrator for doing it justice, superb!

This title is due for release on March 16, 2021
We'll send you an email as soon as it is available!