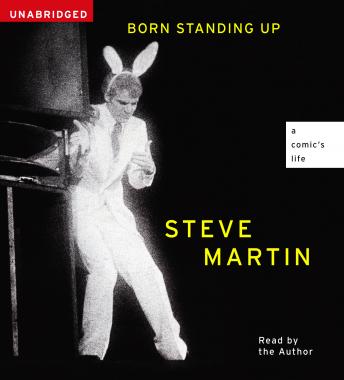 Born Standing Up: A Comic's Life

The riveting, mega-bestselling, beloved and highly acclaimed memoir of a man, a vocation, and an era named one of the ten best nonfiction titles of the year by Time and Entertainment Weekly.

In the mid-seventies, Steve Martin exploded onto the comedy scene. By 1978 he was the biggest concert draw in the history of stand-up. In 1981 he quit forever. This book is, in his own words, the story of “why I did stand-up and why I walked away.”

Emmy and Grammy Award–winner, author of the acclaimed New York Times bestsellers Shopgirl and The Pleasure of My Company, and a regular contributor to The New Yorker, Martin has always been a writer. His memoir of his years in stand-up is candid, spectacularly amusing, and beautifully written.

At age ten Martin started his career at Disneyland, selling guidebooks in the newly opened theme park. In the decade that followed, he worked in the Disney magic shop and the Bird Cage Theatre at Knott’s Berry Farm, performing his first magic/comedy act a dozen times a week. The story of these years, during which he practiced and honed his craft, is moving and revelatory. The dedication to excellence and innovation is formed at an astonishingly early age and never wavers or wanes.

Martin illuminates the sacrifice, discipline, and originality that made him an icon and informs his work to this day. To be this good, to perform so frequently, was isolating and lonely. It took Martin decades to reconnect with his parents and sister, and he tells that story with great tenderness. Martin also paints a portrait of his times—the era of free love and protests against the war in Vietnam, the heady irreverence of The Smothers Brothers Comedy Hour in the late sixties, and the transformative new voice of Saturday Night Live in the seventies.

Throughout the text, Martin has placed photographs, many never seen before. Born Standing Up is a superb testament to the sheer tenacity, focus, and daring of one of the greatest and most iconoclastic comedians of all time.

I've always enjoyed Steve Martin's comedy. However, I had added the book to my list on a whim. Just because I liked his comedy, would I like his writing? Yes! I'm so glad I kept the book on my list and heard it before overthinking the choice and deleting it. Mr. Martin weaves his private and professional lives seamlessly. He artfully allows us to see how the dynamics of each shaped the whole man. With the simplest of words he lays bare such tender feelings. I was moved by the portrayal of his family relationships. And accompanying him on the step by step, year by year odyssey of his career prompted such admiration. Before hearing this book, tenacious, was never a word I coupled with Steve Martin. Now I see him as not just Tut, but Tut the Timex Watch. I hope you give this book a chance. Also, Steve Martin's narration and banjo music gave the entire experience even more heart.

Short - but excellent. Steve Martin's brilliant writing is white light. He is so descriptive and his timing with humor is cleverly weaved into the narrative. It was quite an adventure to journey with him through the fascinating process of his building success. And added bonus is the chapter breaks marked with his banjo-playing talent. This falls into the often-used "must-read" category.

I enjoyed the book very much. I listened to it twice because it was so pleasantly performed. I was in grade school and junior high during the 1970s and I remember watching SM on TV. I bought his comedy albums (and an 8 track!) , his books, and watched all his films. For those who don't remember, the catch phrase, "Well, excuuuuse me!" was so prolific that it was used by people of all ages...for several years. That's pretty amazing.

This book is so dull and boring. Nothing raw nothing funny, I should have kept my money.

Pretty good book, I never knew he struggled so long before he had so many good movies

I'm a huge Steve Martin fan and so was interested in how he grew up and what shaped his life. Very interesting and entertaining story.

Enjoyed narration by the author. A serious biography of a funny man.

I wasn't expecting to enjoy this book, but I read a good review of it and took a chance. I had no idea how complex a person Steve Martin is/was. It really is a fascinating peak into one comedian's personal history, as well as an interesting critique of popular culture and comedy in the 70s and 80s. I highly recommend it!

I already admired and enjoyed Steve Martin's talent, but this book told the story of the hard work, determination, and sacrifice he made to achieve the tremendous success he has enjoyed. I loved his writing and his own narration of his work. Only he could repeat his own bits, jokes, and expressions and bring them to life. While I appreciate that it was not an autobiography, as such, it still had enough personal history to be intriguing. I only wish he had taken it further into his later career. I'd have loved to hear stories about his many other movies. Also, it would have been interesting to know more about his later in life personal relationships, marriage, family and so forth to see what kind of guy he is when he is just "Steve". But, all in all, it was well worth it and fun to listen to.

This title is due for release on November 20, 2007
We'll send you an email as soon as it is available!