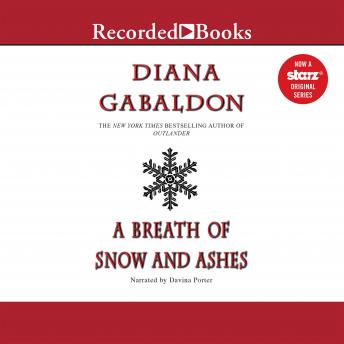 A Breath of Snow and Ashes

A worldwide sensation with more than 12 million copies in print, Diana Gabaldon's Outlander series has produced #1 best-selling novels and earned a fiercely devoted fan base. Another spellbinding entry in the series, A Breath of Snow and Ashes continues the saga of 18th-century Scotsman Jamie Fraser and his 20th-century, time-traveling wife, Claire. The year is 1772, and the rift between Britain and its American colonies has put a frightening word into the minds of all concerned: revolution. In the backwoods of North Carolina, violence has already reared its ugly head, as cabins have been burned to the ground. To preserve the colony for King George III, the governor pleads with Jamie to bring the people together and restore peace. But Jamie has the privilege, although some might call it a burden, of knowing that war cannot be avoided. Claire has told him that the colonies will unite and rebel, and the result will be independence, with all British loyalists either dead or exiled. And there is an additional problem. Claire has discovered a newspaper clipping from 1776 that tells of Jamie's death. With its epic scope, historical details, and sweeping romance, A Breath of Snow and Ashes is everything Gabaldon's fans love and more.

I have fallen in love with this series and Davina is amazing! I love how she can read all these accents and bring the characters to life. Simply amazing!!!

love listening to this series!! she brings the books to life

a wonderful story in the Outlander series. Davina Porter really brings the characters to life.

I enjoy listening to the Outlander series while I cross-stitch or do other crafts or when I am in my car. I can do two things at one time and the narrator makes the story even more interesting!

This whole series is so addictive!

I have loved these books since Outlander was first published and this is one of my favorites. I think Diana is a fantastic story-teller. But I don’t agree with everyone’s praise for Davina Porter’s narration. To my ear, her voices for both Claire and Jamie do not at all suit the characters, by age or personality, and it’s made the audio books difficult for me to enjoy. I have re-read all of the books many times, but my eyes are worsening and I’d love to be able to give myself over to the audio. I’ll keep trying.

Always the best. Great great!!!!! It really brings the book to life in the only way possible

Bravo bravo Diana!! You always make me escape from the world for a bit!!

Another outstanding book in the Outlander series! Davina Porter is mesmerizing!!

The whole Outlander series is absolutely the most amazing series and books I have ever seen and heard. So much so that I am going to Scotland in the spring of 2023! I wish they could go on forever!!!

I could listen to Davina Porter reading these wonderful books all day. Diana Gabaldon's books are rich in detail and very entertaining and the reading of them is perfect.

At times more detail than I prefer, however excellent book and series.

This book series is incredible, the best I've ever read. This book is wonderful and I wouldn't change a thing.. ..except the narrator.

great book. especially going past the TV series and tying some ends nicely.

Love the series and the show

Loved all of it!!

I love the Outlander series and due to life getting in the way hadn't been able to read this one traditionally. listening to this audio book was enthralling and gave me the same (if not better) experience as reading them myself!!! the story flowed and the narrator was very knowledgeable on pronunciations and did a great job at character vocalizations. I can't wait to get to the next book!!!!!

Very well done. Hard to imagine one person being able to add so much inflection, tone & emotion. Truly made the characters to life! Wish the same reader did all of the Outlander books.

My favorite narrator, everything she reads is emotionally precise and smooth.

I just love this book, it's like your there , you listen and drift away....

Love this book but getting a little tired at the author for not ever having a calm moment.....

An epic episode in the Outlander series. Hard to capture all the stories within the one book. Gabaldon is remarkable with historical authenticity and character development. Davina Porter is quite simply the best narrator who has ever performed. Men, women, old, young, multiple languages and accents, her talent is a great gift to listeners.

When I listen to these audio books, it's hard to believe one voice become especially all these voices.

I love listening to these books while I drive. I love the app too my friends are always asking me what are you listening to now.

Davina is so awesome!

Loved this book! She is such a visionary writter, I felt like I was there!

I love this series! This is one of my favorites out of the series. Adventure and touching monents as well as laugh out loud moments. A must read.

This was a great listen! There was never a dull moment. How does Diana keep coming up with all of these story lines! I have an hour commute to and from work and sometimes I wanted to pass up my home just so I could keep listening! The narrator does a great job seamlessly switching between characters.

Excellent audio book couldn't wait to download the next one !

Amazing told. She makes the characters come to life.

This title is due for release on May 6, 2011
We'll send you an email as soon as it is available!