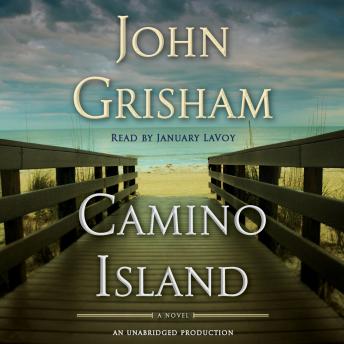 A gang of thieves stage a daring heist from a secure vault deep below Princeton University’s Firestone Library. Their loot is priceless, but Princeton has insured it for twenty-five million dollars.

Bruce Cable owns a popular bookstore in the sleepy resort town of Santa Rosa on Camino Island in Florida. He makes his real money, though, as a prominent dealer in rare books. Very few people know that he occasionally dabbles in the black market of stolen books and manuscripts.

Mercer Mann is a young novelist with a severe case of writer’s block who has recently been laid off from her teaching position. She is approached by an elegant, mysterious woman working for an even more mysterious company. A generous offer of money convinces Mercer to go undercover and infiltrate Bruce Cable’s circle of literary friends, ideally getting close enough to him to learn his secrets.

But eventually Mercer learns far too much, and there’s trouble in paradise as only John Grisham can deliver it.

I enjoyed it but not worth re-listening. I frequently recommend books I've listened to, to my husband to read ... this is not one. Doubt if I'll recommend it to friends either. It was interesting and different but not "keeps you on the edge of your seat" book. I had no trouble pausing it. I expect a bit more excitement or suspense from Grisham.

My husband and I enjoyed listening! Good plot. Abrupt ending.

My wife and I enjoyed this book. We listen to it on our travels in our Motorhome

very entertaining and well written booked. the narration was excelent

No way the same guy who wrote Pelican Brief wrote this book. So simple, no plot twists. Narrator was not good either.

Started out with great promise of suspense and intrigue, but failed to deliver.

This audiobook was perfect for my long road trip, very well written and narrated

clever plot with interaction of multiple players after the same "prize". surprise ending - good to see the "bad" guy outsmart the FBI.

Enjoyed the read!!!! Please read them in order so you can keep up

Not the typical John Grisham novel but it was okay.

I liked the narration and the story but it didn't really keep me on the edge of my seat. A long listen for what I personally thought, not so wonderful ending.

Loved the book, anything by John Grisham is wonderful. The narrator was okay, her male voices were awful though. I felt as though the emotions and tone that the female characters were conveying were lost on the narrator. I did not necessarily enjoy listening to her read this novel

Good beginning , dragged in the middle. Found myself skipping ahead

Can’t believe I went all the way to the end. Boring story with no surprises. 8 hours I could have slept.

Just not a robbery, but a wonderful mixing of characters for never a dull moment of listening. Also learned so much about the world of rare book collecting. Loved it.

This book felt thrown together and "just get it published" - like it's the scraps and leftovers from Grisham's earlier (better) works. Lack of consistent voice and tone. Weakly drawn, stereotypical characters.

I thoroughly enjoyed this book, I wasn't sure at first but it roped me in and I couldn't wait to listen.

The story was okay and somewhat predictable. It wasn't terrible but not on my list to listen again. The narrator did an amazing job.

I enjoyed this book, was introduced to a world that I knew nothing about.

I'm usually a big fan but this book wasn't as good as I was hoping it would be.

Took some time to get into it but it was fine once I did. I agree it's not his best work.

Really bad - boring. Listened based on past novels and won't make that mistake again.

Not worth reading. Uninteresting and boring.

Got awfully trashy. Somewhat of a dull build at the end. Great narrator.

Pretty boring. Not much to the story. Very flat characters and a poorly delivered twist.

Worst Grisham book to date. Not much of a story line.

This book needed more of a twist; otherwise, it was good. It helped make the road trip go faster.

This is the slowest moving and dullest Grisham novel I have ever read or listened too. I am usually really patient but this one is a yawn.

I found that the story lacked any suspense or mystery. The story seemed to plod along. I would have put it down if I was reading a hard copy, but the narration was really well done and the audio was enjoyable. It was disappointing that the story didn't have more to it.

This book was painful! A long drawn-out story which went nowhere fast. Mr. Grisham should be ashamed of this being his newest.

I actually looked for the "other author" on this one. It passed the time for me while I worked but it did not have Mr. Grisham's usual flair. It was reminiscent of those authors who put their name on someone else's book to help it sell. The narrator was ok, maybe even sort of good.

I also have read several John Grisham novels, love him as a writer and decided to try listening to save time rather than reading, my preferred method. I just could not get into it, I have nothing against a female narrator but found myself trying to think in a male voice, but it's not working. I have listened to the first six chapters and have been so distracted by this that I find myself doing other things instead of listening. I, unfortunately, do not like this method for "reading" a book regardless of who the author is. I plan to purchase the book itself and go the old fashioned way, reading.

This is the only John Grisham book I have not enjoyed. I have read every one. The story was boring. I did not like any of the characters, they were not developed so you couldn't like them or root for them and the whole story was just boring.

I found this an easy, and entertaining read. The story flowed smoothly and the narration was first rate.

I have listened to almost every book Mr. Grisham has written, some multiple times; the "testament " and the associate. I find great delight in listening to the stories with excellent narrators. This book had none of those. The story turned boring and went off track a lot. I was very disappointed.

This title is due for release on June 6, 2017
We'll send you an email as soon as it is available!