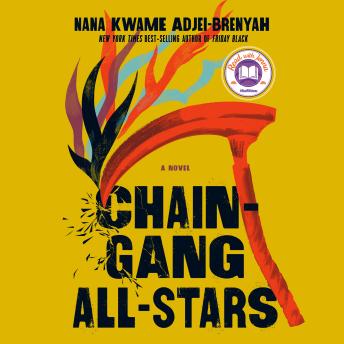 Chain Gang All Stars: A Novel

The explosive, hotly-anticipated debut novel from the New York Times-bestselling author of Friday Black, about two top women gladiators fighting for their freedom within a depraved private prison system not so far-removed from America’s own.

'Wildly entertaining, formally bold, and politically electrifying. Read one page, any page, and you'll see what I mean.” —George Saunders, best-selling author of Liberation Day and Lincoln in the Bardo


Loretta Thurwar and Hamara “Hurricane Staxxx” Stacker are the stars of Chain-Gang All-Stars, the cornerstone of CAPE, or Criminal Action Penal Entertainment, a highly-popular, highly-controversial, profit-raising program in America’s increasingly dominant private prison industry. It’s the return of the gladiators and prisoners are competing for the ultimate prize: their freedom.

In CAPE, prisoners travel as Links in Chain-Gangs, competing in death-matches for packed arenas with righteous protestors at the gates. Thurwar and Staxxx, both teammates and lovers, are the fan favorites. And if all goes well, Thurwar will be free in just a few matches, a fact she carries as heavily as her lethal hammer. As she prepares to leave her fellow Links, she considers how she might help preserve their humanity, in defiance of these so-called games, but CAPE’s corporate owners will stop at nothing to protect their status quo and the obstacles they lay in Thurwar’s path have devastating consequences.

Moving from the Links in the field to the protestors to the CAPE employees and beyond, Chain-Gang All-Stars is a kaleidoscopic, excoriating look at the American prison system’s unholy alliance of systemic racism, unchecked capitalism, and mass incarceration, and a clear-eyed reckoning with what freedom in this country really means from a “new and necessary American voice” (Tommy Orange, The New York Times Book Review).

This title is due for release on May 2, 2023
We'll send you an email as soon as it is available!