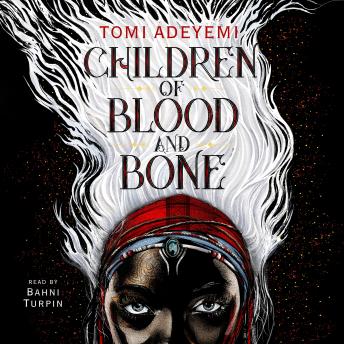 Children of Blood and Bone

#1 of Legacy of Orisha

*Winner of the Audie Award for Audiobook of the Year*

*This program is narrated by acclaimed reader Bahni Turpin, whose past work includes The Hate U Give and The Underground Railroad*

In Children of Blood and Bone, Tomi Adeyemi conjures a stunning world of dark magic and danger in her West African-inspired fantasy debut.

They killed my mother.
They took our magic.
They tried to bury us.

Zélie Adebola remembers when the soil of Orïsha hummed with magic. Burners ignited flames, Tiders beckoned waves, and Zélie’s Reaper mother summoned forth souls.
But everything changed the night magic disappeared. Under the orders of a ruthless king, maji were killed, leaving Zélie without a mother and her people without hope.

Now Zélie has one chance to bring back magic and strike against the monarchy. With the help of a rogue princess, Zélie must outwit and outrun the crown prince, who is hell-bent on eradicating magic for good.
Danger lurks in Orïsha, where snow leoponaires prowl and vengeful spirits wait in the waters. Yet the greatest danger may be Zélie herself as she struggles to control her powers—and her growing feelings for an enemy.

Praise for Children of Blood and Bone:

'[Narrator Bahni Turpin] excels at customizing her voice to capture the unique personalities of each character...This excellent, refreshing performance of Adeyemi's exciting debut is recommended for all collections where fantasy is popular' — Booklist, Starred Review

“One of the biggest young adult fiction debut book deals of the year. Aside from a compelling plot and a strong-willed heroine as the protagonist, the book deals with larger themes, like race and power, that are being discussed in real time.”—Teen Vogue

Loved this book - the narration is amazing!

Such an amazing book.

I enjoyed this book, no.. Loved It!

This book was so amazing. Even though I’m supposed to be doing my homework for the university, I cannot put this book down. As soon as I wake up I have to hear it in my ears in order for me to get my day started. right now I am on an the sequel now.

Fantastic story! Outstanding narration! Riveting plot line, can't wait to hear book 2! Thank you for such a meaningful arc, the time for it is right!

The narration was phenomenal! Really brought the story to life! The book was long but I was entertained the entire way.

This was an amazing read. From the storyline to the character development. Loved it!

great adventure, characters well thought out, ready to read the next series “Children of Virtue and Vengeance”

Great story! Well narrated! I was pulled in from the start.

I was referred this book by the Jimmy Fallon book club and I was not ... It was amazing kept me on the edge of my seat when I was driving And I would highly recommend everybody reading or listening to this book!

The world building was really in-depth and interesting, and the book overall was engaging. However, the characters seemed two-dimensional and inconsistent

I loved loved this book! For the last week, I couldn't wait to get off work and see what was in store for Zélie. Tomi Adeyemi is a master storyteller that successfully brought the world of Orisha to life for me. A world full of beauty, horror and destruction. Characters came to life with such passion and vivid descriptions that I was able to clearly picture them in my mind, feel them in my soul. Tomi's clear mastery in the art of writing made this book such a joy to read, and at times emotionally draining. I say this because there were so many moments throughout the story that depicted first time or overwhelming feelings and emotions and experiences that I was personally left emotionally drained. I guess that just proves how drawn into the world of Orisha I became. My only disappointment came in the epilogue where a social issue was tied to the story. While I agree 110% with the opinion and the eloquence with which it was written, I didn't want to read it there at that time. The message and parallels in the book were not lost to me while reading the book. I applauded and reveared the subtle message throughout the book. Reading is a temporary escape from a world that can be cruel and unrelenting. Let me compare and contrast. Let's do it in book clubs and dissertations, in classrooms, interviews, and debates. Not in the book. Lastly, let me end on a positive note: The final message in the book so poignantly written that we are all "Children of Blood and Bone" gave me great comfort and hope. I loved this book. I can't wait for the next book to be released in 12/19... I have preordered! If it is written as well as the first I am sure to be as impatient for the third. Thank you @tomiadeyemi for bringing Orisha to life for me.

What an amazing read! We need more books like this! I know many girls and boys of color would enjoy reading and can see themselves within the characters. I would definitely recommend including this book on a syllabus for a fantasy literature course.

I really enjoyed this book, for the most part. I loved following Zeylie, her brother, and newfound friend in the beginning as they all learned about one another and advanced as people and comrades together. The story comes to life with the help of the amazing narration, and the characters don't seem one dimensional. The biggest issue that I have with this book is the flip-flopping of character motivations, which I think could've been structured a little better, but perhaps it will be addressed in the next book in the series.

This book wasn’t half as good as I had hoped it be. The message of colorism and institutional racism is clear but the delivery was mundane. I felt that it was unnecessarily lengthy and didn’t really take me on the adventure I’d hope it would I nearly returned it.

Awakening read that made me fall in love with my culture under the spell of a new perspective!