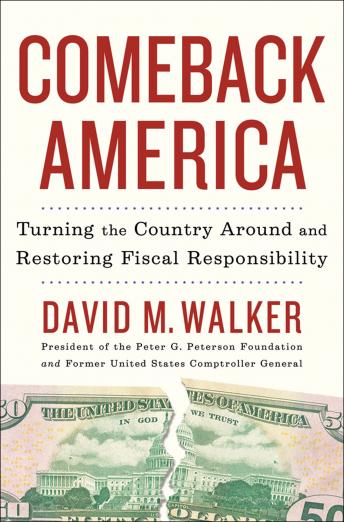 Comeback America: Turning the Country Around and Restoring Fiscal Responsibility

He's one of America's most capable, canny, candid, and independent financial experts. Now David M. Walker sounds a call to action. Comeback America is a tough-minded, innovative, inspiring guide to help us avoid the approaching economic abyss and put the country back on track again.

As comptroller general of the United States and head of the Government Accountability Office (GAO)—'the nation's top auditor'—Walker warned Congress and the administration as the federal surplus became a giant deficit under George W. Bush. As president and CEO of the Peter G. Peterson Foundation, he now works full-time to raise public awareness regarding mounting debt burdens being imposed on future generations. Comeback America is his crucial manifesto, a way for President Obama to end out-of-control government spending and reform our tax, retirement, health care, defense, and other systems—before it's too late.

Walker believes that by 2030, absent significant reforms to current government programs and policies, federal taxes could double from current levels, meaning less money and poorer education for kids—which will hurt families along with our nation's economic strength and position in the world. If our foreign creditors—such as China—decide to buy fewer of our Treasury bonds, interest rates will rise and cars and homes will become less affordable.

But it doesn't have to be that way. Comeback America shows how we can return to our founding principles of fiscal responsibility and stewardship for future generations. The book includes bold ideas to control spending, save Social Security, dramatically alter Medicare, and simplify the tax code—all taking into account the Obama Administration's current efforts, which receive never-before-published assessments both complimentary and critical.

Nonpartisan, nonideological, and filled with a love of the country its esteemed author has spent his life serving, Comeback America is a book for anyone interested in America's economic future—in other words, a book everyone should read.

This title is due for release on January 12, 2010
We'll send you an email as soon as it is available!