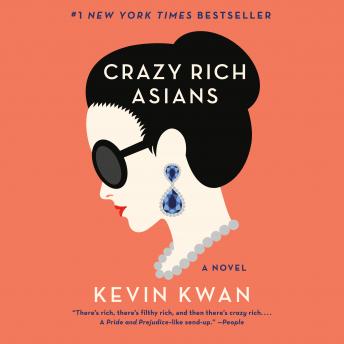 'There's rich, there's filthy rich, and then there's crazy rich ... A Pride and Prejudice-like send-up about an heir bringing his Chinese-American girlfriend home to meet his ancestor-obsessed family.” –PEOPLE

When New Yorker Rachel Chu agrees to spend the summer in Singapore with her boyfriend, Nicholas Young, she envisions a humble family home and quality time with the man she hopes to marry. But Nick has failed to give his girlfriend a few key details. One, that his childhood home looks like a palace; two, that he grew up riding in more private planes than cars; and three, that he just happens to be the country’s most eligible bachelor.

On Nick’s arm, Rachel may as well have a target on her back the second she steps off the plane, and soon, her relaxed vacation turns into an obstacle course of old money, new money, nosy relatives, and scheming social climbers.

Very detailed into the high luxury world of old Asian money. I loved the story. I'm actually glad I'm late to learn about it so I can move on to book 2 asap! Narrator gets a 10!

I enjoyed both the book and the narration! It was entertaining and I'm excited to move on to book 2! I can't wait for the film and I hope it'll be just as great!

Fun story to listen to! Pretty accurate with current life in Singapore based on different families and how they accumulated their wealth from long ago. The narrator leaves something to be desired. The different voices, accents and word pronunciations are weak.

This book was hilarious! So fun to listen to. The narrator was great!

At the beginning of this book, I couldn’t believe the hype of this series. I thought the plot included a ton of racism and bigotry against the Asian culture. I wonder how true some of the cultural practices are.

Loved the first 3/4 of it, but it ended too quickly, like a TV series that found out they were getting canceled and were forced to rush and wrap it up.

It was really amusing and addicting to listen to the book. The narrator did an awesome job and made the story even more interesting and funny.

I'm two chapters in and I can't continue with it. The narrator's effort in sound Chinese just doesn't cut it. She's definitely butchered the Cantonese sayings that I've come across so far. Sorry, I'm sure this is a great book but it just depresses me to read about rich people's lifestyles.

This was such a fun, entertaining read! 3.5 stars. All the characters and how they’re related to each other is a bit confusing from the start, but you’ll eventually figure it out. The narrator does a fantastic job as well!

I was not crazy about some of the voices the narrator used. Especially irritating was the voice she used for Nick Young. She made him sound like a bored 80 year old.

I enjoyed this book. I listened to the audio book after watching the movie with friends. The story lines are so different! They "hollywoodized" the movie.

best book I've ever read, the movie was fantatic as well. cant get enough, i love how theve followed true. to historic details. its opened up a whole new world for me. ashamed to say i was illeterate about Asains. I find my self studying their culture, especially their architecture, its off the hook crasy, no pun indended. love it!

I felt it dragged on a bit and didn’t pick up until the last hour of listening.

I thoroughly enjoyed this book. Narration was great, too. Looking forward to the movie, and to reading more by this author.

This book is hilarious. It was my turn to pick the audio for our long drive. It was so entertaining and clever, we never stopped laughing. We’ll be seeing the movie soon. He wants me to download the next one for our next trip!

So many unnecessary details, kind of dragged on. I get that its about rich people but I was bored by all the name dropping of labels, etc. Yeah yeah, we get it... Narrator was great though- so many different voices! I think the storyline is better for a movie than a book.

Excellent book, I didn’t want to turn it off and wished it had gone on for another 19 hours!!!! Excellent narrator! Wish they would have used her for the other two books. Highly recommend this book & the other two in the trilogy. They won’t disappoint!

Overall I enjoyed the story and am very interesting in reading the other two books. I found that the endings of many chapters are a bit abrupt. Chen's narration is very clear, but I do feel the accents at times were a bit exaggerated. Definitely recommended!

Fun story. Not literature but really interesting with educational facts folded in the story.

I enjoyed this book. The storyline was interesting and intriguing. Kevin Kwan is a great storyteller. And I appreciated the narrator's effort to give each character a different voice. It was icing on a very good cake. Can't wait to dive into the next installment.

Narrator was fabulous with all the accents!

had to marathon this book before the movie and its great! great story, plots etc. enjoyed the narration too

I didn’t think the narrator was good at accents...I thought her reading was very bland...I would not listen to another book narrated by her. There was not enough of a story...and didn’t get to know the characters...very disappointed by this book.

The narration was awesome, the book had down right laugh out loud moments, and it made me happy in the end, what more could you qant?

Ok, I liked it. Did not love it. Not sure where all the hype came from. soooooo many different characters. Kinda unresolved.... wish they would have taken some fluff out

“I see your face.” ~Nick’s grandmother to Rachel My tags for this novel are… Entertaining / Diverse and complex characters / Witty / Page-turner / Multi-layered story / Happy For Now for Primary Couple ★¸¸.•*¨*•★Minor spoilers alert★•*¨*•.¸¸★ Format read: Unabridged Audiobook Narrated by: Lynn Chen Length: 13 hrs and 53 mins Release Date: 06-11-13 Publisher: Random House Audio Writing style: Multiple POVs Cover design (movie cover tie-in): It’s truly gorgeous. I love this version of the book cover the most. I love the smiling poses of the movie actors, great choice! Ratings Overall ★★★★1/2 I think there were one too many points of view explored. That made it more challenging to follow especially via audiobook. I found myself rewinding several times because I had gotten lost on whose point of view it was or what was happening. But overall, I really enjoyed their stories, and how they connected back to Nicholas Young and Rachel Chu. •*¨*• Lynn Chen’s Performance ★★★★★+ She has such a lovely voice. And she even sang beautifully during one scene. She had no problems emoting and doing both male and female voices well. I look forward to hearing more performances of hers in the future. She more than anything kept me invested in the outcome of the multiple story threads introduced. •*¨*• Story ★★★★☆ Issues relating to cultural identity and marriage / coupledom and their tricky dynamics dominated this novel. It was definitely eye-opening and educational. I learned a lot about the Richie Rich of Singapore that I never knew before. There was a great deal of humor and some angst as different characters connected to Nick and Rachel as their lives intersected both in New York and also during their summer vacation to attend Nick’s best friend Colin’s wedding in Singapore. I loved that this trip sped of Nick’s realization that he was ready to take his relationship with Rachel to the next level. His commitment was more important to him than his family’s wealth and all that came with it. The other characters like Nick’s cousin Astrid Leong also had their own family drama. In particular, I felt badly for Astrid and where she and her husband ended up. Her first love Charlie really impressed me by giving her some interesting advice on whether or not she should grant her husband a quick divorce or delay it. He was still in love with her in spite of his own marriage and yet he did nothing but show his support after she revealed she was still in love with her husband and unable to accept his logic and argument for a divorce at this point in the marriage. Presumably, the sequels follow up on both Nick and Rachel’s relationship as well as Astrid’s, hopefully on Colin’s wedded bliss and maybe checks in on one or two more characters that we spent time learning about in this first novel. However, I do feel as if this first novel could stand alone if readers chose not to continue. I’m on the fence about whether or not I will. At any rate, I’ll definitely wait to see if Warner Brothers Studio produces the next book before reading it. •*¨*• Next in the Crazy Rich Trilogy: China Rich Girlfriend, available now

Great book! Engaging plot told in alternating chapters from multiple points of view. Really gave a comprehensive view of this luxury world. The narrator did a great job of managing many different character voices.

What a fun read! What a crazy world! And the narrator in her accented reading leant a lot of atmosphere and authenticity and made it even more fun. Downloading volume 2 immediately!

excellent narrator! I enjoyed every minute!

Narration was superb! The book was very entertaining and witty.

Entertaining listen and a glimpse into a world most of us cannot even imagine. It was perfectly delivered by the reader. A good reader can make or break an audiobook experience. This one was excellent.

Hilarious! Sometimes silly but not dumb.

Hilarious book! The narrator was great! The best narrator so far on audio. Can’t wait to listen to book 2.

I enjoyed this book a lot! hope the movie adaptation will be good as well

Good narrator!!! Very accurate depiction of the uhni in Asia.

Book is great (hilarious), but narrator does a terrible British accent ... it's distracting.

It was a fun book. Once you get ahold of all the characters, or most of the main ones, it's a lot of fun. I'm going to read the sequel for sure!!

I thoroughly enjoyed this book. I thought the narrator did an excellent job with the accents and characters. I was still able to keep track. While it did go in depth in the life style of the very rich and famous, you did get a glimpse of Asian culture and class. The story was cute and entertaining. I was glad there was a sequel!!!!

A must listen. Takes you into the world of upperclass Asians and their drama . Love it