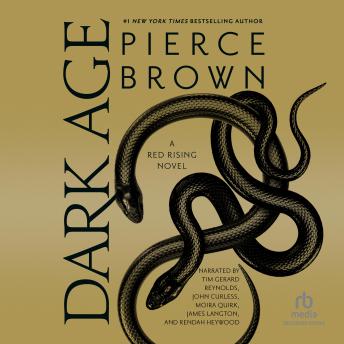 For a decade Darrow led a revolution against the corrupt color-coded Society. Now, outlawed by the very Republic he founded, he wages a rogue war on Mercury in hopes that he can still salvage the dream of Eo. But as he leaves death and destruction in his wake, is he still the hero who broke the chains? Or will another legend rise to take his place? Lysander au Lune, the heir in exile, has returned to the Core. Determined to bring peace back to mankind at the edge of his sword, he must overcome or unite the treacherous Gold families of the Core and face down Darrow over the skies of war-torn Mercury. But theirs are not the only fates hanging in the balance. On Luna, Mustang, Sovereign of the Republic, campaigns to unite the Republic behind her husband. Beset by political and criminal enemies, can she outwit her opponents in time to save him? Once a Red refugee, young Lyria now stands accused of treason, and her only hope is a desperate escape with unlikely new allies. Abducted by a new threat to the Republic, Pax and Electra, the children of Darrow and Sevro, must trust in Ephraim, a thief, for their salvation-and Ephraim must look to them for his chance at redemption. As alliances shift, break, and re-form-and power is seized, lost, and reclaimed-every player is at risk in a game of conquest that could turn the Rising into a new Dark Age.

Solid installation for the series but bring back the narrators from book 5! The previous Lyria and Lysander were way better fits for the characters.

It is my opinion, this is the best book in the series. Unexpected twists at every turn. I am anxiously awaiting book 6.

Some stories and new characters are very far fetched in thisone, but overall a good piece in the puzzle of red rising. Liked the new narators better than in Iron gold.

This is an utterly incomprehensible sequel. How anyone can figure out what's going on with the first book as a reference is beyond me. The narrator, as with the first book is fantastic. I would usually be inclined to keep with it but this second book feels like there is a HUGE chunk of narrative missing. Such a shame as the first book was SO good.

I was sad to see a couple of the narrators change, most importantly Lysander. This is a good book but be warned to is hard to read at times, it reminded me of reading book two of the hunger games and finding out they had to go back to the arena. Only that same feeling happens almost a dozen times in this book, it was emotionally exhausting. Also, the amount of cursing is significant, like more than all of the other books combined by far. Not only that but the variety of “bad words” is worth noting. I know these aren’t kids books, and the violence far exceeds the foul language, it was a bit much for me. My desire to see this series to completion is the only reason I finished it, it is unlikely I listen to this book again. The original trilogy I love so much that I have read it 3 times, not so much with this one.

While the book is excellent I miss having 1-2 narrators like the other books. Having too many narrators was a little annoying, also some of the narrators simply read too fast making it hard to keep up.

This title is due for release on July 30, 2019
We'll send you an email as soon as it is available!