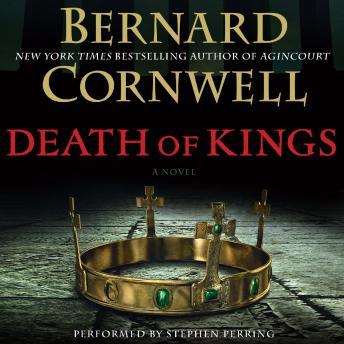 Death of Kings: A Novel

The sixth installment of Bernard Cornwell’s bestselling series chronicling the epic saga of the making of England, “like Game of Thrones, but real” (The Observer, London)—the basis for The Last Kingdom, the hit BBC America television series.

As the ninth century wanes, England is perched once more on the brink of chaos. King Alfred is dying; with his passing, the island of Britain seems doomed to renewed warfare. Alfred wants his son Edward to succeed him, but there are other Saxon claimants to the throne—as well as ambitious pagan Vikings to the north.

With the promise of battle looming again, Uhtred, the Viking-raised but Saxon-born warrior, whose life seems to shadow the making of England itself, is torn between competing loyalties. Uhtred’s loyalty, and his vows, are to Alfred—not to his son—and despite long years of service to the old king, Uhtred is still reluctant to commit to Alfred’s cause. His own desire is to reclaim his long lost ancestral lands and castle to the north. As the king’s warrior he is duty-bound, but the king’s reign is nearing its end, and his death will leave a vacuum of power. Uhtred is forced to make a momentous choice: either take up arms—and Alfred’s mantle—to realize his dream of a united and Christian England, or be responsible for condemning it to oblivion.

Death of Kings is a harrowing story of the power of tribal commitment and the dilemma of divided loyalties. This is the making of England magnificently brought to life by “the best historical novelist writing today” (Vince Flynn).

the story wasnt to bad, it was a little slow in the beginning but picked up later into the story. the narration was dreadful, right off the start he had bored me and I wished to get through story just so I didnt have to hear this narrative, there was no difference between on character to another, he barely did any female voices still sounding like a man, and most of all he kept on saying the modern names of the cities instead of the old names which is clear in the books (example) instead of saying uthred of bebbanburg he would say bamburgh! the book is clear on that! his reading annoyed me so much I would do my own voices over his reading so that I could be immersed in the story and not get mad at his lack of care for the story or immersion of his reading. when this was done I was happy about the story but relieved that didnt have to hear this guy again.

Great story. So sorry to say, I'm spoiled by Mr. Keebler. Good narration, not the best

I would have to say that the only negative take away from listening to this Audiobook is that the Narrator is not as good book #1,2,&5... On a positive he was not as bad as the narrator for book #3 and on a positive note he didn't rush the reading as the narrator of book #4. this narrator gets a positive 3 star rating.

This title is due for release on January 17, 2012
We'll send you an email as soon as it is available!