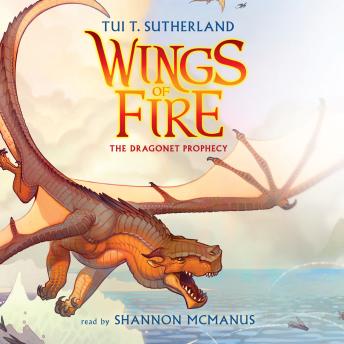 The Dragonet Prophecy (Wings of Fire #1)

The seven dragon tribes have been at war for generations, locked in an endless battle over an ancient, lost treasure. A secret movement called the Talons of Peace is determined to bring an end to the fighting, with the help of a prophecy -- a foretelling that calls for great sacrifice.

Five dragonets are collected to fulfill the prophecy, raised in a hidden cave and enlisted, against their will, to end the terrible war.

But not every dragonet wants a destiny. And when the select five escape their underground captors to look for their original homes, what has been unleashed on the dragon world may be far more than the revolutionary planners intended . . .

Great storyline with thrilling events and has you hooked. Can not turn it off

I’m sure I’ll be reading this whole series.

A beautiful, THRILLING~(Pun intended) story thay gets you hooked immediately! I can't wait 'till I can get The Poision Jungle on audiobooks!

I thoroughly enjoyed this reading in particular. The emotion Shannon pours into the text is absolutely breathtaking. As for the story itself, I fell in love with it the moment I discovered it, many years ago. I was thrilled to discover there was an audiobook recording for it, and I wasn't disappointed in the slightest. Shannon really does justice to this great story.

Really enjoyed my new friends I've had to catch up to my son he's on the third book so this is really helping me out.... I drive truck so I don't have many friends but the Dragonets r great for me :) I enjoy how it's a story about the dragons life not humans

I think it was the best audiobook I’ve herd

This is one of the best books I’ve ever read!

Wow! Love this story. Shannon reads it with clarity

I got this book to listen to with my kiddos. Good book, but a little graphic for young kids.

A great book, but these narrators sound like robots

Really enjoyed the book. Just waiting for book two to come out

This title is due for release on July 1, 2012
We'll send you an email as soon as it is available!