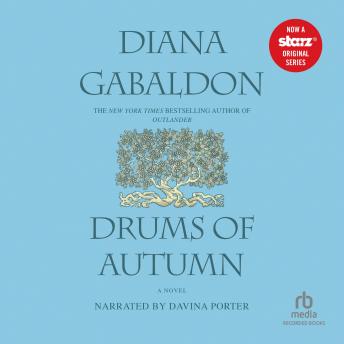 Diana Gabaldon's fans will be delighted to find Jamie and Claire as spirited and endearing as ever in this fourth installment of this magnificent saga. Romance, history, and time travel blend once again as the couple builds a new life together in the wilderness of pre-Revolutionary America. Twice Claire has used an ancient stone circle to travel back to the 18th century. The first time she found love with a Scottish warrior but had to return to the 1940s to save their unborn child. The second time, twenty years later, she reunited with her lost love but had to leave behind the daughter that he would never see. Now Brianna, from her 1960s vantage point, has found a disturbing obituary and will risk everything in an attempt to change history. Davina Porter's narrative talent adds a special vibrance and resonance to Gabaldon's complex, colorful characters. If you've experienced Outlander, Dragonfly in Amber, or Voyager), you already know the length of the book is deceptive. None of them is nearly long enough.

Awesome book, I love listening to Davina, she captures the characters accents and we know who is talking. Very well done.

This book made me laugh and cry. It made me Anxious and sad. Would a book to do all that that it is by far a five star book

I loved this book on to the next in the series makes a long drive short..

Better than Voyager, when it comes to the phrasing and biases of the characters. It's still uncomfortable to constantly hear 'savage' or 'the chinese' or 'the indian' instead of centering these characters personhood, whether it is accurate or not, but this book feels more human and less stereotypical than the last in a few aspects. The strengthening of Brianna's storyline is encouraging, though Bonnet's entire subplot feels like continual and deeply unforgiving gut-punches for the reader. Doesn't compare to Randall as a bad-guy, but I can't really tell why. Still, it's nice to see the time through the eyes of our characters and the moment where Brianna tells you-know-who off is genuinely a shining beacon smack dab in the middle of the book. The narrator, as always, is exceptional and her accents and singing brings a smile to my face.

Love this book, the history, and the growing family through out. This is my second time through the series. Could do without so much sexual assault. I ff through it. MUCH better than the TV series.

An excellent continuation of the series. Many important details. Excellent narration!

I love all of Diana's, books. I have seen her in person and she signed four of my books. I thanked her for the way she wrote and the wonderful history she winds into her story. One of my favorite parts of this one is Jamie finally gets to meet his beautiful daughter. I never get tired of reading it or listening to this wonderful meeting.

I loved this book.

Another wonderful novel by Gabaldon. Difficult to explain 4 stars without giving away part of the storyline but I did not enjoy quite as much as the three previous works in the series.

I thoroughly enjoyed this book from beginning to end. Davina Porter who narrates the book has the ability to bring the story and its characters to life. . Highly recommended.

When I first was told about these books I thought I would not like them. I was right I love them

Love the story, narrator does a wonderful job with the characters.

love this book! Davina Porter does an amazing job narrating

Loved it, finished it and then read it over again.

A very enjoyable book, well read. Thumbs up, if you're a fan of the series. :)

AS always great narration and love the story.

This book takes you to the Southern Colonies in the 1760s. Great read.

I really enjoy the book and the Narration!

brilliant book just as good as first time i read it

The writing is superb, as we all know. The narrator is absolutely wonderful. Davina Porter makes this book come to life.

Fabulous continuation of a wonderful story and read like it were a play - such feeling an smooth!

Sensational! Diana takes me to places I can see smell and taste. I have never been so enthralled with books as I am with Diana's.

What a mesmerising life story of love; struggle; survival, adventure. I couldn't put the book down. Even my boyfriend noticed how hooked I was with my head stuck in the book for a week. Love it

It is an amazing and very exciting story, you just can't get enough of!

adventure romance family what is there not to love

Great listen. I love this series. I read the books years ago. Love it then. It’s better with the accents! I feel like I am there too.

The narrator was ok, but the accents made me confused about certain characters ages.

love this book one of my favorites

Loved listening to this book, I laughed, some points i had tears in my eyes, great for listening to when pottering around, I have downloaded another??

Great book, best narration! You get very invested in Brianna, and start questioning Jamie. I cried during the birth, perfect!

Such a good book and imaginative narrative. Different accents and a way of making the characters come to life

Narrated by Davina Porter. Great story. Kept me on my toes.

I love this series. I have not read them in order, but honestly that hasn't made any impact in my enjoyment at all. Davina Porter is perfection. She transports me into the story.

This series is addictive. I always feel engulfed in the Outlander story and its characters. Drums of Autumn was enthralling from the start. Davina Porter reads it so well. Looking forward to the next book!

Great as usual! It kept me thinking of what will happen next. Loved this one can't wait to begin the next book.

Excellent Davina Porter is wonderful and I love all the Outlander books. I wish it wasn't quite so expensive to use your service I would order more books but on a fixed income it is impossible for me to do so

Very well done. It's a great story and I highly recommended it.

Davina Porter brings the characters to life. One of the best audiobooks I've heard.

Davina Porter is the best pick for narration of Outlander series, it was a joy to listen to her!

One of the best books I've ever read. Exciting! Couldn't put the book down! Gabaldon leaves you hanging every time!!! I can't wait to get the next book.

I love the outlander series, and this book did not disappoint!

Love the narrator! She's amazing! Does such a great job. Makes me really fall in love with the books

Davina porter is fantastic, she makes the characters come alive.

I love it! I'm working my way through the series and I'm enjoying every minute!

Very well done. Narrator did an amazing job reading it can't wait to hear the rest.

Absolutely, positively without a doubt the best to listen to and also the best narrator. I look forward to getting more audio books in the future thanks BJP ????????

I love the book, the characters and how it's read by the narrator. Her voice is amazing.

This book is jam packed of action and love. Great listen!!

Love, love, love this series. Narration is clear and entertaining!

With more twists and turns than the Mississippi, the family comes together with a couple of additions. If, like me, you've never given birth, you'll get a vicarious journey for the process! A good read and you'll love Brianna.

This is the best narrator I have ever heard !!! She is amazing through the whole book and changing her voice to fit each character I can't even begin to say enough about her nor the author... xoxo

I can't believe I am still hooked after four books! This book was as good as the three previous. I try to tell myself to move onto another author but don't think I can until the series is finished! The whole audiobooks experience is amazing - made me actually look forward to my three hours a day in the traffic!

I love all of the Outlander Series books!! Can't wait until #9 comes out!!

Wonderful !!! The book is great and narrating is riveting

5 stars for book and narrator. Listened so many times never loses its freshness

Love the Outlander series and highly recommend all 8 books.

I love this series and this book is no exception. Diana Gabaldon always keeps you on the edge of your seat and she has some incredible twists in these books. Davina Porter is by far the best narrator that I've listened to. You forgot only one person is reading this as she brings all of the characters to life. I highly recommend!

Am loving this story so much! The narrator has a great voice and makes you feel you are right there with them!

Davina Porter is the most amazing narrator! Her mastery of accents makes this wonderful story even more enjoyable as an audiobook. I couldn't stop listening!

Davina Porter bring all these incredible charaters to life. Love her narration as well as this entire series of books!

Loved this book and the whole series. Claire and Jaimie are so romantic. The descriptions of landscape and surroundings are amazing.

Love love love. This is the best book series I have enjoyed this app so much.

This book is one of my favorites in this outstanding series. I can pick up any of these books,open to any section & start reading and be instantly drawn into these incredible characters. But this narrator is amazing. Listening is even more awesome.

Incredible narration by Davina Porter. She masters the accents and dialects superbly.

Awesome listening! Gabaldon has weaved the story line into the most incredible book series I have ever heard. I can't stop listening to them.

Ms. Porter does a brilliant job bringing the story to life!

This title is due for release on October 24, 2014
We'll send you an email as soon as it is available!