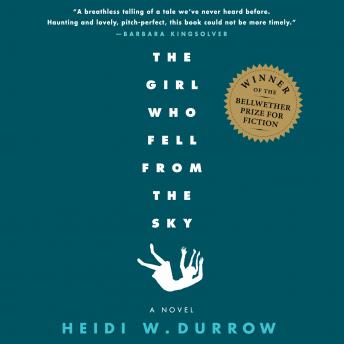 The Girl Who Fell from the Sky

A timely and moving bicultural coming-of-age tale, based on a true story and told by an author who has struggled with the same issues as her protagonist.The daughter of a Danish immigrant and a black G.I., Rachel survives a family tragedy only to face new challenges. Sent to live with her strict African-American grandmother in a racially divided Northwest city, she must suppress her grief and reinvent herself in a mostly black community. A beauty with light brown skin and blue eyes, she attracts much attention in her new home. The world wants to see her as either black or white, but that’s not how she sees herself.Meanwhile, a mystery unfolds, revealing the terrible truth about Rachel’s last morning on a Chicago rooftop. Interwoven with her voice are those of Jamie, a neighborhood boy who witnessed the events, and Laronne, a friend of Rachel’s mother. Inspired by a true story of a mother’s twisted love, The Girl Who Fell from the Sky reveals an unfathomable past and explores issues of identity at a time when many people are asking “Must race confine us and define us?”Narrated by an ensemble, with Emily Bauer (Rachel), Kathleen McInerney (Nella), and Karen Murray (Jamie, LaRone, Brick, Roger).

I enjoyed the story and reading of this book. I stayed very interested all the way through this book, although I didn't really care for the ending...

The premise of the story is interesting however the writing and telling are pretty bland.

I wanted to like this book, but although it tackled some important issues I felt there were a lot of obvious stereotypes and the characters didn't get as deeply explored as I'd have liked. Plus there was a lot of melodrama.

I enjoyed reading this book although it was a little confusing until the end and is not exactly a "page turner". Still, it explores some important topics about race and poverty in a very interesting way, as well as relating the feelings of a young girl as she comes to understand her sexuality. Narrators are excellent and add to the enjoyment.

This title is due for release on February 10, 2010
We'll send you an email as soon as it is available!