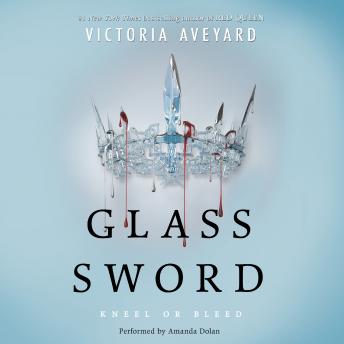 Perfect for fans of George R.R. Martin’s Game of Thrones series, Glass Sword is the high-stakes follow up to the #1 New York Times bestselling Red Queen.

Mare Barrow's blood is red—the color of common folk—but her Silver ability, the power to control lightning, has turned her into a weapon that the royal court tries to control. The crown calls her an impossibility, a fake, but as she makes her escape from Maven, the prince—the friend—who betrayed her, Mare uncovers something startling: she is not the only one of her kind.

Pursued by Maven, now a vindictive king, Mare sets out to find and recruit other Red-and-Silver fighters to join in the struggle against her oppressors. But Mare finds herself on a deadly path, at risk of becoming exactly the kind of monster she is trying to defeat. Will she shatter under the weight of the lives that are the cost of rebellion? Or have treachery and betrayal hardened her forever?

my favorite in the series by far!!

I have mixed feelings. It read like a diary. There were times of action, but it was like they were accounts of the action. I was going to four-star this book but then the end happened. The title was excellent. The end was superb. I cannot wait for the next book.

I liked the first book, but in the second book the main character, Mare, drives me crazy! The author has her over-explain everything--her feelings, her surroundings, others feelings, and she acts like she knows what others are thinking. The author should have written it from third person instead of from 1st person, Mare's perspective. I found myself rolling my eyes many times when Mare would go on and on about her feelings...about what she was, and what she is now. Very annoying. I think the story is interesting, but it should have been half the length, in my opinion. It dragged on. The narrator is pretty good, but sometimes I couldn't tell who was talking.

I enjoy this book, I think it's a very interesting read. I think the way the narrator reads this book is great. brings the characters to life vs. just a voice reading! book 2 here I come lol

great book series, can't wait for the movie. should be bigger than the hunger games.

I enjoyed the intensity of this book, by first 1/3 is a bit lingering. The rest was very good. Looking forward to the next, great cliff hanger at the end! The narrator is too notch, so impressed with her performance.

I don't even care to read further in the series

I agree with another persons criticism, Kathy Hagen, this book was way too over explained. I wanted to keep hitting fast forward...

I am so glad that book 3 came out as I started this one. I am angry that it is not a trilogy as I had thought but that has nothing to do with this book. I loved this book more than the first. I really loved Mare and Cal and how they grew and changed. I dislike some of the deaths. The narration is great and I love listening to her voice.

Intriguing series. Bummed out that next book is still being written.

Loved it. Kept me interested and great plot and narration.

Great series to start. I love the narrator and now I sadly await for book 3 to come out! Amazing story telling and evokes so many emotions!! Loved this book. I will not give anything away but this was a great listen!!

Good story, can't wait to hear the next book. I think it'll be a good series once it's completed!

this one seems dragging and I thought if will be last one but it was not ! narrator is excellent because she made this book more interesting and enjoy ever chapters.

This title is due for release on February 9, 2016
We'll send you an email as soon as it is available!