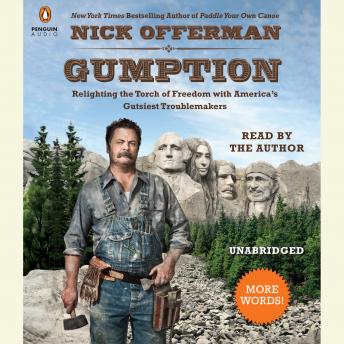 Gumption: Relighting the Torch of Freedom with America's Gutsiest Troublemakers

The star of Parks and Recreation and author of the New York Times bestseller Paddle Your Own Canoe returns with a second book that humorously highlights twenty-one figures from our nation’s history, from her inception to present day—Nick’s personal pantheon of “great Americans.”

To millions of people, Nick Offerman is America. Both Nick and his character, Ron Swanson, are known for their humor and patriotism in equal measure.

After the great success of his autobiography, Paddle Your Own Canoe, Offerman now focuses on the lives of those who inspired him. From George Washington to Willie Nelson, he describes twenty-one heroic figures and why they inspire in him such great meaning. He’ll combine both serious history with light-hearted humor—comparing, say, George Washington’s wooden teeth to his own experience as a woodworker. The subject matter will also allow Offerman to expound upon his favorite topics, which listeners love to hear—areas such as religion, politics, woodworking and handcrafting, agriculture, creativity, philosophy, fashion, and, of course, meat.

So many things that I agree with. We think alike. It is also outrageously funny.

I have been inspired to take up the works of Wendell Berry and delve into the music catalogue of Wilco. This sermon memorializing 21 Americans, 22 if you count the author himself, 23 if you count is wife who has a palpable presence in his narration, portends that the key to navigating the divisive wilderness that is American ideologies and politics is a strong sense of gumption. Gumption in this instance consistently is the determination to work hard, do what is right, and approach all others with a loving and open mind. No sophomore slump for Mr. Offerman!

This title is due for release on May 26, 2015
We'll send you an email as soon as it is available!