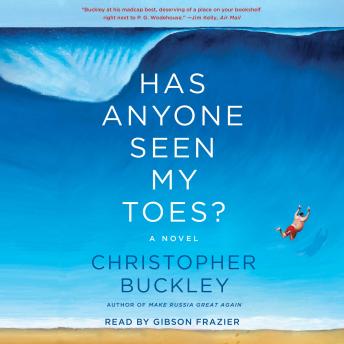 Has Anyone Seen My Toes?

From the bestselling author of Thank You for Smoking and Make Russia Great Again comes a comic tour de force, the story of one man’s spiraling journey through lockdown during the Covid-19 pandemic.

During the pandemic, an aging screenwriter is holed up in a coastal South Carolina town with his beloved second wife, Peaches. He’s been binge-eating for a year and developed a notable rapport with the local fast-food chain Hippo King. He struggles to work—on a ludicrous screenplay about a Nazi attempt to kidnap FDR and, naturally, an article for Etymology Today on English words of Carthaginian origin. He’s told Peaches so often about the origins of the world mayonnaise that she’s developed an aversion to using the condiment. He thinks he has Covid. His wife thinks he is losing his mind. In short, your typical pandemic worries. Things were going from bad to worse even before his doctor suggested a battery of brain tests. He knows what that means: dementia!

But even in these scary times, there are plenty of things to distract him. His iPhone is fat-shaming him. He’s been trying to read Proust and thinks the French novelist missed his true calling as a parfumier. And he’s discovered nefarious Russian influence on the local coroner’s race. Why is Putin so keen to control who decides who died peacefully and who by foul play in Pimento County? Could it be the local military base?

Has Anyone Seen My Toes? is a hilarious romp through a time that has been anything but funny.