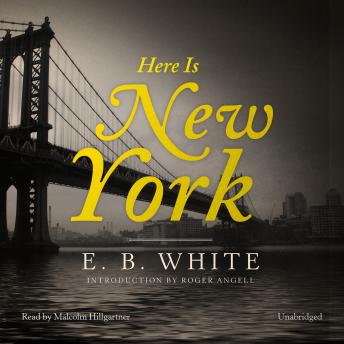 Perceptive, funny, and nostalgic, E. B. White’s stroll around Manhattan remains the quintessential love letter to the city, written by one of America’s foremost literary figures. The New York Times named Here Is New York one of the ten best books ever written about the metropolis, and the New Yorker called it “the wittiest essay, and one of the most perceptive, ever done on the city.”

Included with this essay are two short poems by E. B. White: “Commuter” and “Critic,” both published in the New Yorker in 1925.

Pure enjoyment for those who are familiar with or had past engagement with this marvelous city....no matter how recent or past. The narration is wonderful o tone and expression. Enjoy !

This title is due for release on May 3, 2016
We'll send you an email as soon as it is available!