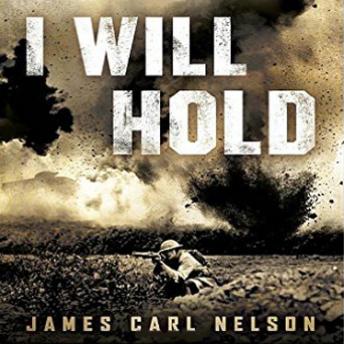 I Will Hold: The Story of USMC Legend Clifton B. Cates From Belleau Wood to Victory in the Great War

The incredible true story of Clifton B. “Lucky” Cates, whose service in World War I and beyond made him a legend in the annals of the Marine Corps.

Cates knew that he and his small band of marines were in a desperate spot. Before handing the note over to a runner, he added three words that would resound through Marine Corps history:

From the moment he first joined the Marine Reserves of the American Expeditionary Force in World War I, Clifton B. Cates was determined to make his mark as a leader. Little did he know what he would truly accomplish in his legendary career.

Not as well-known as his contemporaries such as Alvin C. York, his fame would not come from a single act of heroism but from his consistent and courageous demeanor throughout the war and beyond.

In the bloody second half of 1918 with the 6th Marine Regiment, he was awarded the Navy Cross, the Distinguished Service Cross, the Purple Heart, the Silver Star, was recognized by the French government with the Legion of Honor and the Croix de Guerre, and earned the nickname “Lucky.”

I Will Hold is the inspiring, brutally vivid, and incredible true life story of a Marine Corps legend whose grit and unstoppable spirit on the battlefield matched his personal drive and sage wisdom off of it.

I enjoyed the book greatly - hearing first hand accounts of the ferocity of the fighting was very interesting.

Absolutely unreal what the men went through during the World War I. Find the book a bit slow but found it very interesting. Whilst listening to the book the movie 1917 about the World War 1 was released and defnitly will go and watch it.

Amid all the horrors they faced the author and narrator maintained the soldiers humanity and allowed me to identify with the men and all their hardships and triumphs.

This is a great story and very detailed for a newer written WWI book. Obviously there is a great deal of excitement and heroism in it relating to WWI but it really glossed over his dealings in WWII and the rest of his legendary rise in the score. Overall I would recommend to anyone who already enjoys military histories... not necessarily one to cut your teeth on.

The harsh realities of World War 1 are laid out bare. I was very impressed by the courage of these men. It gives me an extreme appreciation for their sacrifices. That being said, it was not a book that inspired me. I would not recommend it for anybody unless they wanted the true picture of what the war was really like.

Absolutely fascinating and awe inspiring is the bravery and determination of these men. My uncle fought with the 4th division mentioned in the book in the second World War and it gripped me to hear about their deeds. This book and the fabulous narrator bring everything to life in a way that had me wanting to learn more. I did,(in contrast to others giving reviews here), not find the goings on difficult to follow in the least but instead found myself immersed in it to the degree that I listened to the whole book non stop, only pausing to sleep! I recommend this to anyone with even a spark of love for our freedoms, as this will truly make you grateful to those who have gone before us for what we now have. The narrator had just the right accent, the right speed and a voice that could with ease belong to the main character of the book! Excellent all round.

Interesting book but difficult to follow all the action, as mentioned below. The courage and horror described are almost impossible to relate to, but that is war.

Motivated by loss of distant relative to wounds suffered at St. Mihiel, interested in account of Great War and details of WW I combat render my sense of wonder at what was endured even greater. This is a very interesting book, but perhaps a bit detailed for audio in that the dispositions of the troops at Belleau Wood, Soissons, etc. a bit difficult to follow without a map...and numbers of companies, battalions, divisions etc. found a bit challenging to keep in order of battle...but the narrative, use of primary sources in terms of letters, diaries, etc. brought experience home in dramatic first person accounts.

This title is due for release on October 1, 2016
We'll send you an email as soon as it is available!