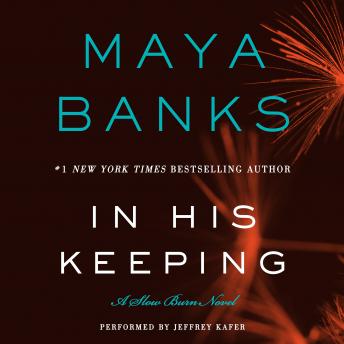 In His Keeping: A Slow Burn Novel

#1 bestselling author Maya Banks continues her suspenseful and steamy Slow Burn series with this second book—a twisting tale featuring a strong yet vulnerable heroine in danger and the sexy alpha hero who must save her.

Abandoned as a baby to a young wealthy couple and raised in a world of privilege, Arial has no hint of her past or who she belonged to. Her only link lies in the one thing that sets her apart from everyone else—telekinetic powers. Protected by her adoptive parents and hidden from the public to keep her gift secret, Ari is raised in the lap of luxury, and isolation. That is, until someone begins threatening her life.

Beau Devereaux is no stranger to the strange. As the head of Deveraux Security, he’s more than familiar with the realities of physic powers. So when a family friend approaches him about protecting his daughter, he’s more than ready to jump on board. What Beau isn’t prepared for is the extent of his attraction to his beautiful and powerful client. What began as a simple assignment, just another job, quickly turns personal as Beau discovers he’ll do anything at all to protect Ari. Even if it costs him his life.

I enjoyed this book. It was a fast paced interesting book, full of good characters and a good story. I am going to go back and listen to the first book in the Slow Burn series.

This title is due for release on January 27, 2015
We'll send you an email as soon as it is available!