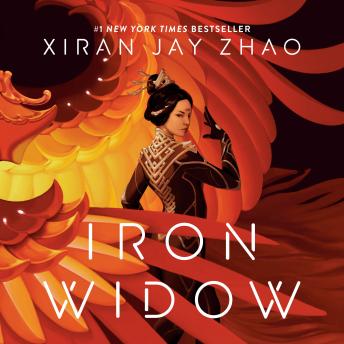 Pacific Rim meets The Handmaid's Tale in this blend of Chinese history and mecha science fiction for YA readers.

The boys of Huaxia dream of pairing up with girls to pilot Chrysalises, giant transforming robots that can battle the mecha aliens that lurk beyond the Great Wall. It doesn't matter that the girls often die from the mental strain.

When 18-year-old Zetian offers herself up as a concubine-pilot, it's to assassinate the ace male pilot responsible for her sister's death. But she gets her vengeance in a way nobody expected—she kills him through the psychic link between pilots and emerges from the cockpit unscathed. She is labeled an Iron Widow, a much-feared and much-silenced kind of female pilot who can sacrifice boys to power up Chrysalises instead.​

To tame her unnerving yet invaluable mental strength, she is paired up with Li Shimin, the strongest and most controversial male pilot in Huaxia​. But now that Zetian has had a taste of power, she will not cower so easily. She will miss no opportunity to leverage their combined might and infamy to survive attempt after attempt on her life, until she can figure out exactly why the pilot system works in its misogynist way—and stop more girls from being sacrificed.

BOYYY DO I HAVE A LOT TO SAY ABOUT THIS BOOK. (Though you should be warned I’m male so if you don’t want to listen to me mansplain, aka give my own dumb opinion of this book, then feel free to ignore my rant lol) I was very intrigued by the concept of Iron Widow. It seemed like a breath of fresh air in an otherwise pretty monotone landscape of sci fi worlds I’ve explored recently. Although I’m male and no longer usually read ya books, i seemed to fit the target demographic somewhat. I’m a sci fi nerd who loves world-building and jumps from one mythology to obsessively research to another. And although I’m not a woman i do consider myself a feminist, so please please don’t take what i am about to say me criticizing the message behind this book. I am not. The message is an important one, the world this all takes place in is breath taking, but the rest was a disappointment. This book had the potential to be a 10, but flat characters, paragraph after paragraph of exposition and a lukewarm plot at best pushes it down to a 4 for me. Its not a bad book, its just painfully meh. So let me begin with the potential. I don’t have any nostalgia tied to mecha series like Gundam or Transformers, mecha was never really for me, but GODDAMN if this book didn’t fill a Chrysalis shaped hole in my heart I didn’t know i had. The blend of sci fi and Han-Dynasty culture, Confucianism and characters borrowed and reinvented from mythology is some of the most creative and beautiful word building i have seen in a long time. The author is clearly very knowledgeable on these subjects and made them come alive into a beautiful landscape of rice paddies, wastelands and futuristic pagodas. I was ready for them to whisk me away on an epic feminist revolution and what i got was definitely intended to be that… buuut it read more as a 4chan users interpretation of what he thinks feminist literature is. Okay so perhaps that is a bit harsh, but it gets my point across. The feminist message of the book is pushed too directly, too often to a point where it starts to feel like a satire of itself. It ties in a lot with two of my other main issues with the book, those being the amount of “tell don’t show” and the main heroine having exactly two personality traits, the most dominant of which is anger with the patriarchy. Don’t get me wrong, her anger is understandable, but when she isn’t given ANY other personality traits (besides the love arc, im not counting her sister as she is is forgotten pretty fast). She feels less like a person and more like copy of the authors personal manifesto with legs. Her inner monologue is unnatural, stiff and rather than showing us what she feels and thinks it is mainly variations of her directly telling us“The world is bad and sexist”. Which it is, let me repeat, i have nothing against the feminist theme itself. The foot binding scenes were powerful, but they were powerful because they SHOWED the horrendous oppression she faced rather than saying “she faced horrendous oppression because the world is sexist” Well they did say that a lot too, but im trying to focus on the positive here. The Mc isn’t the only character with about as much dimension as a paper doll though, this whole cast is starting to resemble an arts and crafts project. The love interests are Arch types, the men in power and the family are so cartoonishly evil I can’t take them seriously and somehow out of the whole book which is supposed to be about girls supporting girls, only 3 other female characters besides the Mc are described even somewhat positively. One of which is dead when the story begins and another who only introduced in the last chapters and doesn’t have a single line IN THE ENTIRE BOOK. I know women can aid the patriarchy too, but you ARE allowed to have more than 1.75 strong women in the entire story. After a while i wondered if perhaps i was expecting too much of the book. It’s meant for people who are a few years younger than me and maybe when i was 15 I would have needed the extremely direct and painstakingly repeated explanations of “sexism is bad and i am angry”. But no. 15 year olds aren’t stupid. They know sexism is bad, they can read through symbols and scenes where things are left unsaid, so there is absolutely no reason to dumb everything down. Or to put it plainly, if you think your reader is mature enough to process the extremely graphic torture scene I think they’re also mature enough too not be spoon fed all the information multiple times. So to summarize. The book is not a blazing trash fire but instead just a lukewarm forgotten at the bottom of the drawer smolder. It is a microwave meal your well meaning partner makes you, but with some small pieces of Michelin grade meat hidden within the bland. It disappointed me about as much as i probably disappointed my first boyfriend in bed. It is, sadly, even painfully so, mid.

This was an amazingly well written novel with beautiful and compelling characters. And I think the narrator did such an amazing job bringing the story to life. The emotion held within Rong Fu's voice made the entire experience immersive and impossible to pull away from. Now having heard Rong Fu, I hope to find more audiobooks narrated by them.

This title is due for release on September 21, 2021
We'll send you an email as soon as it is available!