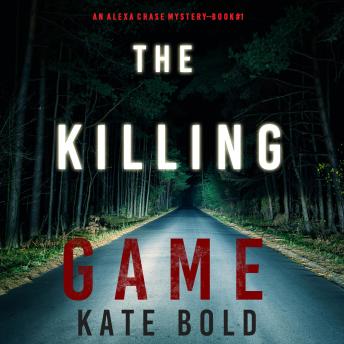 #1 of An Alexa Chase Suspense Thriller

THE KILLING GAME (An Alexa Chase Suspense Thriller—Book 1) is the debut novel in a new series by mystery and suspense author Kate Bold.


Alexa Chase, 34, a brilliant profiler in the FBI’s Behavioral Analysis Unit, was too good at her job. Haunted by all the serial killers she caught, she left a stunning career behind to join the U.S. Marshals. As a Deputy Marshal, Alexa—fit, and as tough as she is brilliant—could immerse herself in a simple career of hunting down fugitives and bringing them to justice.


But when a notorious serial killer escapes from a prison transport, it crosses the jurisdictions of the U.S. Marshals and the FBI’s BAU. The two departments are forced to come together on a new joint task force to hunt down the fugitive serial killer and bring him to justice. Alexa, to her dread, finds herself forced to confront the thing she fears the most—entering a killer’s mind. Doing so again, she knows, may just drag her down for good.


Alexa and her new partner, each territorial, don’t take well to each other. Between their tension and all the clues leading to dead ends and the bodies piling up on the killer’s spree, Alexa knows that she, up against a ticking clock, can’t afford to get this wrong. Especially when she realizes that she herself may be the next target.


To find this diabolical killer, Alexa will have to do what she fears most—enter his twisted mind, before he can strike again. It’s a life-and-death game of cat and mouse, and it’s winner takes all.


But will the darkness swallow her whole?


Books #2 and #3 in the series—THE KILLING TIDE and THE KILLING HOUR—are also available.

I was gleefully amazed by both the content and the narrator. I listen to these while I work but couldn’t help but stop to listen more carefully. Wonderful!

Amazing. Had me on my seat the entire time. I can’t wait to listen to the rest of the series

Really enjoyed this book and narration

Great book… a must listen.

This was a great book - can’t wait for more in the series!

Great book. Kept my interest from beginning to end.

Having a male narrator on a female lead story was a bad choice. Also, the narrator had a flat monotone that was grating. Story was good but it would have been better if the narrator was different.

Not as suspenseful or surprising as I was hoping. It was still a good and interesting read.

I really enjoyed this book. If you like books from the perspective of law enforcement, you'll like this book.

Nope, not so great!

Excellent book to listen to if you are a fan of crime thriller/drama genres. Very well laid out, believable and to the point. Looking forward to more of this series and author!

Took a bit to get into, but entertaining. Would be better with a less flat narrator

Some of the book was predictable but over all held my attention!

Excellent and different story. Kept me wanting to listen to more! Narrator was also very good with a lovely voice. First time I have read this author and will look forward to reading more of their books.

Love this Narrator and the story line keeps you interested. :)

Was a very well written suspenseful book. Enjoyed listening to it.

The story was enthralling and the narration was great !!!

it was ok but not my thing

Good story, predictable, but a nice distraction on a long car ride.

one if the best books I have found on this app and the narrator changes his voice with the characters too.

It was a good novel. I rally like FBI adventures with multiple plots.

Can't wait to listen to more.

First audio book I did enjoy on a long drive! Did it for me

Mediocre story and main character…. Very predictable. The Narrator was awful…. Why a man’s voice for a female lead???

great read and waiting for the next edition

good story. the narrative was a little stilted at times but otherwise I enjoyed the book. I'm going to move the book 2.

I enjoyed this Audio....the narrator made me smile sometimes when he switched voices.

Well written. Kept the listener 's attention to the end of the book. Look forward to the next book in the series. Well narrated

fantastic I love it

It wasn't as good as I'd hoped it would be. It never had me on the edge of my seat and ,I found myself wishing it would get more exciting. That being said,it was well written and,I will probably read another of her books.

Great story and enjoyed the narration

solid book even though a little shorter than my usual reading time.

Loved loved loved this book. Kate is an intriguing author! Will certainly be reading everything she writes.

Really enjoyed the book! Also my first audio book so it was a really different experience!

Fairly average read but narration was poor. A better narrator might have helped the rating.

Completely enjoyed the author and narrator.

I enjoyed this book

Could not finish the book. I’ll rate the author as OK, not as gripping or interesting as the other reviewers led me to believe. The narration did not fit the main character which was so annoying and was the straw that broke the back.

Hard to get into at first. Ended up a good listen. Impressive. Waiting for book 2

Get to listen too and a very good story. Really enjoy these types of books and the narrator is really good

I truly enjoyed listening to this book. Very well narrated and well written. Easy to follow and suspenseful!

loved the book very well read...I'll be back for more.