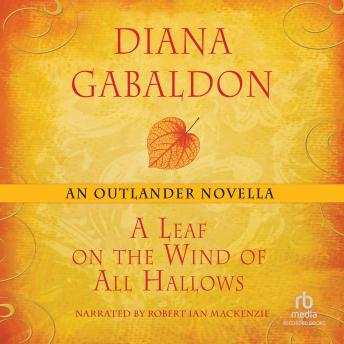 A Leaf on the Wind of All Hallows

Outlander novella, Diana Gabaldon reveals what really happened to Roger MacKenzie Wakefield' s parents. Orphaned during World War II, Roger believed that his mother died during the London Blitz, and that his father, an RAF pilot, was killed in combat. But in An Echo in the Bone, Roger discovers that this may not be the whole story. Now, in ' A Leaf on the Wind of All Hallows,' readers finally learn the truth. Praise for Diana Gabaldon' s Outlander series ' All you' ve come to expect from Gabaldon . . . adventure, history, romance, fantasy.'-- The Arizona Republic, on An Echo in the Bone ' A grand adventure written on a canvas that probes the heart, weighs the soul and measures the human spirit across ten generations.'-- CNN, on The Fiery Cross ' Escapist historical fiction at its best.'-- San Antonio Express-News, on Drums of Autumn ' A feast for ravenous readers of eighteenth-century Scottish history, heroism and romance.'-- Kirkus Reviews, on Outlander

This quick audiobook seems slow moving for the first three-quarters and then feels rushed as it comes to an end. However, this novella does perfectly fill some unanswered holes regarding Roger's parents and provides a lovely backstory. The narrator was clear and tolerable.

This title is due for release on December 3, 2012
We'll send you an email as soon as it is available!