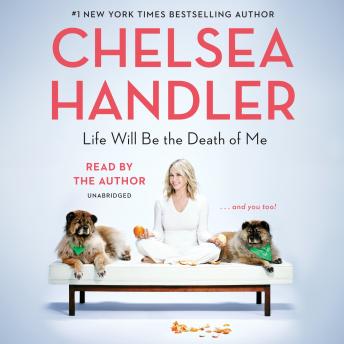 #1 NEW YORK TIMES BESTSELLER • “This will be one of your favorite books of all time. Through her intensely vulnerable, honest, and hilarious reflections, Chelsea shows us more than just her insides. She shows us ourselves.”—Amy Schumer

In the wake of President Donald Trump’s election, feeling that her country—her life—has become unrecognizable, Chelsea Handler has an awakening. Fed up with the privileged bubble she’s lived in, she decides it’s time to make some changes.

She embarks on a year of self-sufficiency and goes into therapy, prepared to do the heavy lifting required to make sense of a childhood that ended abruptly with the death of her brother. She meets her match in an earnest, nerdy shrink who dissects her anger and gets her to confront her fear of intimacy. Out in the world, she channels her outrage into social action and finds her voice as an advocate for change. With the love and support of an eccentric cast of friends, assistants, family members (alive and dead), and a pair of emotionally withholding rescue dogs, Chelsea digs deep into the trauma that shaped her inimitable worldview and unearths some glittering truths that light up the road ahead.

Thrillingly honest and insightful, Chelsea Handler’s darkly comic memoir is also a clever and sly work of inspiration that gets us to ask ourselves what really matters in our own lives.

This is the book that I needed to hear at this time. I needed to examine my own lack of empathy. I am a lot like Chelsea. I just fix the problem or person and don’t take into account much about how the other person feels. Empathy does not come naturally.

I’m listening for the second time! I have a daily battle within to try to be more vulnerable, in hopes it will unlock a better version of myself. Thank you Chelsea Handler for reminding me to let my guard down, find the root and be grateful for the journey.

My favorite Chelsea Handler book yet. Chelsea Handler was extremely raw and vulnerable in this memoir filled with stories of adult and childhood and growing up to realize your privilege and when you’ve been tainted by politics and society. This was a funny insightful look into the last few years of Chelsea handler‘s life. I very much enjoyed reading this book and if you’re a fan of Chelsea Handler you will as well.

I enjoyed this book. Chelsea read this so genuinely. I felt her sadness and humor. I enjoyed her sharing her experiences of her life.

I truly enjoyed the book. Her humor cushioned some of the more sensitive topics. The way she describes her home life in a comedic way made the story a little more lighthearted. We all may have experienced things of the same nature but could never narrate it the way she does. Her self reflection I felt was important and the fact that she finally found a therapist that helped her to identify her shortcomings was necessary for the more serious side of the storyline. I liked that she used her voice to show how seeking good professional help can sometimes be more beneficial than not.

Funny and sad. her voice crackling during the desperation of the loss of her brother is something only someone who lost someone close can understand. heartbreaking yet hysterical in a classy way

AMAZING. Her transformation is beautiful. it's refreshing to hear a story of honesty, growth and mindfulness of letting anger go and giving gratitude the energy. Empathy is powerful in it's peace and that's exactly how the book left me feeling. peaceful

Great listen, C. Handler's voice and reading was on point and her biography was very educational as well as entertaining. Thank you for your book.

This book explains so much about Chelsea. It was heart breaking to read about the loss of her brother. He would be so proud of you Chelsea. Enjoy.

I enjoyed Chelsea's previous books which is why i got this one, it was good enough, very personal more of a self discovery story, her story. It was nice to have it in her voice.

I really liked this book, it made me laugh and cry all at the same time.

Loved this book and the message, i felt like i was in therapy with Chelsea and it was exactly what i needed.

Super! I love her pure honesty. The story is heartfelt and true. Makes you cry and laugh

I liked it, but I liked the Bobby Bones memoir better. She had a very “in-your-face” kind of dialogue. Her writing style was less about “sit down and talk as friends” and more about her, her, her. The beginning of the book is all about her therapy session with her Psychiatrist; I liked this self-reflection and explanation of self. Most of the book seems to be about her coming to terms with her past. She lost her brother when she was 9-10. I would recommend the book!

I loved listening to this book while driving back and forth from work. I loved that she opened up so much in this!

Chelsea Handler swims brilliantly on the surface but seems unable to dive deep. We know very little about the brother whose death was so traumatic, it’s all about the effect it had on Chelsea. No amount of wit can broaden a kind of narcissism into a view, a connection, vision about the richness of the world. It’s always and only about her.

This title is due for release on April 9, 2019
We'll send you an email as soon as it is available!