Lost and Found: The True Story of Jaycee Lee Dugard and the Abduction That Shocked the World 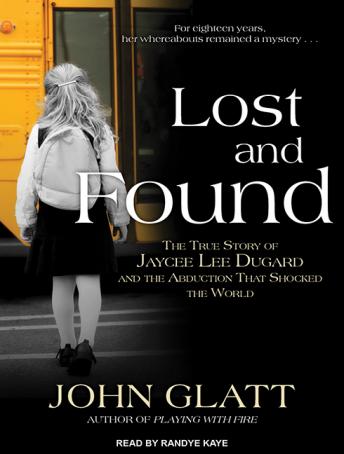 In 1991, eleven-year-old Jaycee Lee Dugard was kidnapped on her morning walk to the school bus. The search for Jaycee made national headlines, and the case was repeatedly featured on America's Most Wanted. But despite her family's tireless efforts, Jaycee's disappearance remained a mystery.

Then, in August 2009, a registered sex offender named Phillip Garrido appeared on the University of California, Berkeley, campus alongside two young women whose unusual behavior sparked concern among campus officials and law enforcement. That visit would pave the way for a shocking discovery: that Garrido was Jaycee Lee Dugard's kidnapper. For eighteen years Jaycee had lived on the Garrido property in Antioch, California. Kept in complete isolation, she was repeatedly raped by Garrido, who fathered her two daughters.

When news broke of Jaycee's discovery, there was a huge outpouring of relief across the nation. But questions remain: How did the Garridos slip past authorities? And how did Jaycee endure her captivity? This is the story of a girl-next-door who was lost and found.

Lost and Found: The True Story of Jaycee Lee Dugard and the Abduction That Shocked the World

This title is due for release on July 22, 2014
We'll send you an email as soon as it is available!