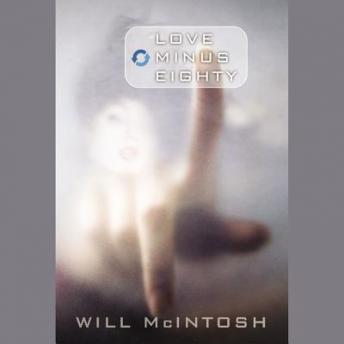 In the future, love is complicated and death is not necessarily the end. Love Minus Eighty follows several interconnected people in a disquieting vision of romantic life in the century to come.

There's Rob, who accidentally kills a jogger, then sacrifices all to visit her in a cryogenic dating facility, seeking forgiveness but instead falling in love.

Veronika, a shy dating coach, finds herself coaching the very woman who is stealing the man she loves.

And Mira, a gay woman accidentally placed in a heterosexual dating center near its inception, desperately seeks a way to reunite with her frozen partner as the years pass.

In this daring and big-hearted novel based on the Hugo-winning short story, the lovelorn navigate a world in which technology has reached the outer limits of morality and romance.

Wow! The best sci-fi book that I have read in a very long time