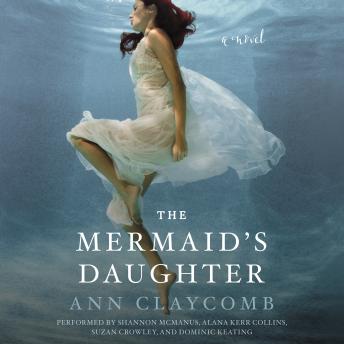 The Mermaid's Daughter: A Novel

A modern-day expansion of Hans Christian Andersen’s The Little Mermaid, this unforgettable debut novel weaves a spellbinding tale of magic and the power of love as a descendent of the original mermaid fights the terrible price of saving herself from a curse that has affected generations of women in her family.

Kathleen has always been dramatic. She suffers from the bizarre malady of experiencing stabbing pain in her feet. On her sixteenth birthday, she woke screaming from the sensation that her tongue had been cut out. No doctor can find a medical explanation for her pain, and even the most powerful drugs have proven useless. Only the touch of seawater can ease her pain, and just temporarily at that.

Now Kathleen is a twenty-five-year-old opera student in Boston and shows immense promise as a soprano. Her girlfriend Harry, a mezzo in the same program, worries endlessly about Kathleen's phantom pain and obsession with the sea. Kathleen's mother and grandmother both committed suicide as young women, and Harry worries they suffered from the same symptoms. When Kathleen suffers yet another dangerous breakdown, Harry convinces Kathleen to visit her hometown in Ireland to learn more about her family history.

In Ireland, they discover that the mystery—and the tragedy—of Kathleen’s family history is far older and stranger than they could have imagined.  Kathleen’s fate seems sealed, and the only way out is a terrible choice between a mermaid’s two sirens—the sea, and her lover. But both choices mean death…

Haunting and lyrical, The Mermaid’s Daughter asks—how far we will go for those we love? And can the transformative power of music overcome a magic that has prevailed for generations?

I love the idea of generations of women descended from the Little Mermaid and much of the basic premise for this plot was intriguing to me — plus I am a rabid opera lover, so I’m disappointed that this well written story wasn’t satisfying at all. It’s problematic that the mermaid-descendant, Kathleen, is one of the least likable characters in the story. I’m not sure why her wonderful girlfriend, Harry, and her father love her so much; I got a greater sense of their trauma from her admittedly horrific pains that she inherited. The overall tone of the novel is also too angry-feminist for my taste, with nearly all the men - including Hans Christian Andersen and even Kathleen’s father Robin - cast as self-absorbed abusers, to varying degrees, of the mermaid each is physically drawn to. The implication is depressing and dehumanizing for all the characters, except perhaps for Harry who avoids the author’s blanket stereotyping of the relationship between men and women. The coda story of Andersen and the original mermaid detracted from any empowerment or satisfaction that could have resulted from Kathleen’s ending — a weirdly placed letdown. A final critique that is not directed at the author, but I also bristled when the narrators speaking Kathleen’s and Harry’s stories mispronounced the names of operatic heroines; something no one who knows opera, as these characters are supposed to, would ever do! It’s LuCHEEya and JEElda. Thankfully the narrator speaking the father’s role, understands that names from Italian operas are pronounced as Italian names. Ultimately, the most interesting, most believable character(s) and best narrator for me were the sea witches who wrought the original curse. They were fun and their narrator is magnificent

I loved the narrators, and the book felt familiar yet fresh.

A dark and twisty version of the little mermaid told with a twist of opera and music. I listened to the audio book and the readers were great and gave the accents that I would have imagined. I am not sure why the last part was included in the story. It didn't add clarity for me only more confusion.

A retelling of the little mermaid. Overall it was ok with beautiful descriptions but fell short on character development.

This title is due for release on March 7, 2017
We'll send you an email as soon as it is available!