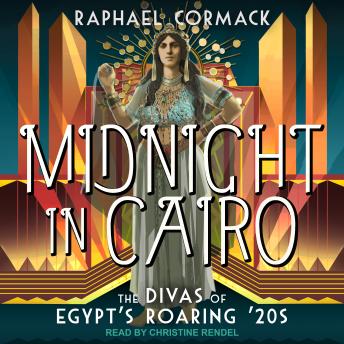 Midnight in Cairo: The Divas of Egypt's Roaring 20s

A vibrant portrait of the talented and entrepreneurial women who defined an era in Cairo.

One of the world's most multicultural cities, twentieth-century Cairo was a magnet for the ambitious and talented. During the 1920s and '30s, a vibrant music, theater, film, and cabaret scene flourished, defining what it meant to be a 'modern' Egyptian. Women came to dominate the Egyptian entertainment industry-as stars of the stage and screen but also as impresarias, entrepreneurs, owners, and promoters of a new and strikingly modern entertainment industry.

Raphael Cormack unveils the rich histories of independent, enterprising women like vaudeville star Rose al-Youssef (who launched one of Cairo's most important newspapers); nightclub singer Mounira al-Mahdiyya (the first woman to lead an Egyptian theater company) and her great rival, Oum Kalthoum (still venerated for her soulful lyrics); and other fabulous female stars of the interwar period, a time marked by excess and unheard-of freedom of expression. Buffeted by crosswinds of colonialism and nationalism, conservatism and liberalism, 'religious' and 'secular' values, patriarchy and feminism, this new generation of celebrities offered a new vision for women in Egypt and throughout the Middle East.

This title is due for release on April 6, 2021
We'll send you an email as soon as it is available!