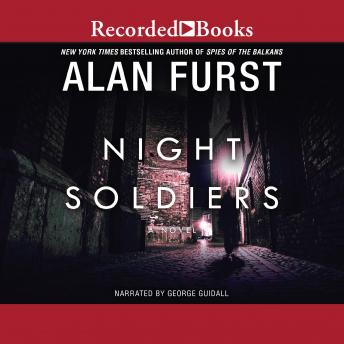 Bulgaria, 1934. A young man is murdered by the local fascists. His brother, Khristo Stoianev, is recruited into the NKVD, the Soviet secret intelligence service, and sent to Spain to serve in its civil war. Warned that he is about to become a victim of Stalin's purges, Khristo flees to Paris. Night Soldiers masterfully re-creates the European world of 1934-45: the struggle between Nazi Germany and Soviet Russia for Eastern Europe, the last desperate gaiety of the beau monde in 1937 Paris, and guerrilla operations with the French underground in 1944. Night Soldiers is a scrupulously researched panoramic novel, a work on a grand scale

Just listen to the first sentence: if it intrigues you, listen on, but if it puts you off, you probably want to pick up a different book. I read this book in print form twice in a summer and have listened to the audiobook several times since. Furst has a special talent for capturing this particular time period and a real knack for examining the subtle effects of nationalism and history on individuals. He doesn't spare any of his characters; the lucky ones survive with very deep scars. But there's mirth here, too, and an appreciation for the potential for joy in the midst of dark times. He's made a bit of a career out of writing in this universe but, with the exception of Dark Star, I'm not sure any of the follow-ups packs quite the same punch. George Guidall is a perfect voice who really knows how to relish the sly ironies that Furst packs into his novels. This was the first recording of Guidall's I've listened to and he instantly became my favorite. Highly recommended.

Night Soldiers is a lengthy but entertaining summer read set in a grim period. Would have liked a bit more emphasis on the American characters, who are introduced and then mostly dropped. George Guidall was a superb narrator.

This title is due for release on March 3, 2008
We'll send you an email as soon as it is available!