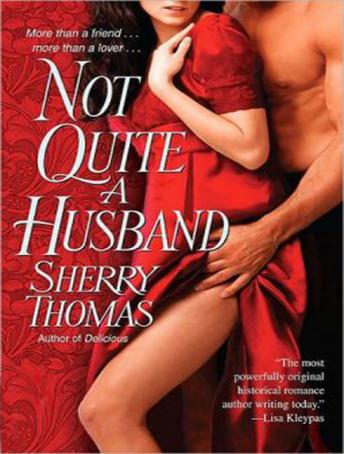 Not Quite a Husband

Their marriage lasted only slightly longer than the honeymoon-to no one's surprise, not even Bryony Asquith's. A man as talented, handsome, and sought after by society as Leo Marsden couldn't possibly want to spend his entire life with a woman who rebelled against propriety by becoming a doctor. Why, then, three years after their annulment and half a world away, does he track her down at her clinic in the remotest corner of India?

Leo has no reason to think Bryony could ever forgive him for the way he treated her, but he won't rest until he's delivered an urgent message from her sister-and fulfilled his duty by escorting her safely back to England. But as they risk their lives for each other on the journey home, will the biggest danger be the treacherous war around them-or their rekindling passion?

Great story! Full of adventure and well developed characters. I don't care much for the narrator's style. I think she has one of those voices that you either appreciate or dislike.

I enjoyed this book, the characters were interesting and had depth. However I found that the book wears its research too openly, but then there were some glaring inaccuracies like the mention of the Geneva Convention.

This title is due for release on November 4, 2014
We'll send you an email as soon as it is available!