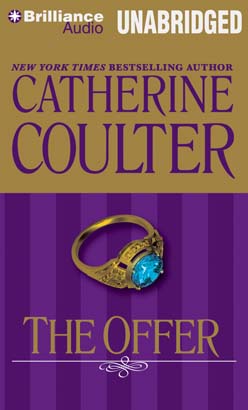 Dear Reader:Phillip Mercerault and Sabrina Eversleigh first appeared in An Honorable Offer, a Regency romance published in 1981. I changed the title to The Offer to reflect its new status as a historical romance after I rewrote the novel extensively (in 1997). The result is a complex, fascinating story with thrilling plot twists and richer characters.During a blizzard, Sabrina Eversleigh runs away from home after her new brother-in-law attempts to rape her. She would surely die if Phillip Mercerault did not rescue her. He nurses her back to health and discovers that he is not a hero. Instead, he’s a gentleman who has compromised a lady. Now there’s only one thing to do—marry her.But Sabrina turns him down, leaving him completely baffled. However, things don’t turn out quite the way Sabrina planned, and it is she, then, who must propose, sweetening the pot with a big dowry and an offer of freedom for Phillip. But what’s a husband to do when he knows his bride is afraid of men? And more important, what is the bride to do when she follows her husband to his mistress’s lodgings and discovers him on the point of indulging?Phillip and Sabrina have a long way to go before they can sit amicable at the same table together. Do write me and tell me what you think of The Offer.Catherine Coulter

This title is due for release on November 1, 2013
We'll send you an email as soon as it is available!