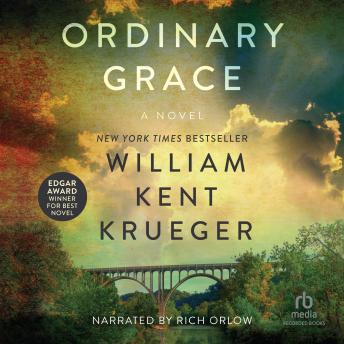 From 'New York Times 'bestselling author William Kent Krueger comes a brilliant new novel about a young man, a small town, and murder in the summer of 1961. New Bremen, Minnesota, 1961. The Twins were playing their debut season, ice-cold root beers were at the ready at Halderson's Drug Store soda counter, and 'Hot Stuff 'comic books were a mainstay on every barbershop magazine rack. It was a time of innocence and hope for a country with a new, young president. But for thirteen-year-old Frank Drum it was a summer in which death assumed many forms. When tragedy unexpectedly comes to call on his family, which includes his Methodist minister father, his passionate, artistic mother, Juilliard-bound older sister, and wise-beyond-his years kid brother, Frank finds himself thrust into an adult world full of secrets, lies, adultery, and betrayal. On the surface, 'Ordinary Grace' is the story of the murder of a beautiful young woman, a beloved daughter and sister. At heart, it's the story of what that tragedy does to a boy, his family, and ultimately the fabric of the small town in which he lives. Told from Frank's perspective forty years after that fateful summer, it is a moving account of a boy standing at the door of his young manhood, trying to understand a world that seems to be falling apart around him. It is an unforgettable novel about discovering the terrible price of wisdom and the enduring grace of God.

Loved this book. I read it along side of my teenage son. It truly makes you think about life and how fragile it is and the presence of a higher being.

I enjoyed this book. It was suspenseful until the end. There are not many books told from the viewpoint of a 12 year old boy. In spite of that fact it kept me interested. The narrator did an amazing job taking on the many characters in the book. He was excellent.

An easy listening book that does not require you to spend 100% of your time concentrating, although it throws in a little bit of a mystery as you have to decipher who done it as the story concludes. Written in the voice of the oldest son, it flows and ebbs easily and resonates about choices we must make in the crossroads of life.

This was an excellent book! The plot and everything about it was just right for me. It has everything a story needs. Mystery, murder, family dysfunction and a whole lot of people involved!! I highly recommend this audio book and the narrator was also excellent

It was such an excellent read! Love the story and the narrator! It hate derp in my heart!

Excellent book. They were very interesting characters. It was certainly one of the best I have listened to/read in a long time. The narrator was also excellent.

very well narrated. Kept me captive as I listened daily.

Nicely written. Ending summed up a little too quickly. Had forgotten who some of the people were by then.

Loved this book. Very relatable..,Couldn’t stop listening to. The narration was perfect.I felt like I knew everyone!!

This book reels you in from the very beginning. The story is told through the eyes of a boisterous and sometimes rebellious 13-year-old, but the themes are universal…what is normal, God, love, death, redemption? I didn’t want this book to end.

This was an excellent book. It was a very thought provoking book and the characters were easy to fall in love with.

Well-developed and believable characters. A human story with a mystery woven in (as opposed to the opposite). It really made me ponder things in my own life. Highly recommend.

Fantastic narrator. Great story! Interesting characters and details in a simpler time. Surprise ending. What more can you ask for?

Loved the book even though it was somewhat predictable—a good portrayal of how people deal with tragedy. The author did a wonderful job with family dynamics showing that love and understanding help heal all wounds.

I loved this book. The pacing was great and I loved the relationship between the brothers as they navigated through their challenges.The character of the father was also so well written . He was a rock of stability but not afraid to show vulnerability. A great story with some final twists and turns. Kept me interested to the last page.

Was a little slow at times but overall a good read. I really appreciated the message especially during these difficult days. 2020

Very interesting story and quality narration. Enjoyed it much.

Enjoyed this story and how it was told from perspective of an adolescent. Narration made it even better!

I think narrator's can make or break a book, I've stopped listening to good books bc how bad the narration was. I've listened to hundreds of books and hands down Rich Orlow is the best. I'd prob listen to him read the Bible straight through, he's everything you want when listening. This was a great story too.

I really enjoyed this story. As it happens, I was 13 in 1961, so could relate to a lot of the details surrounding the characters. Types of meals, clothing etc. I felt the narrator did a wonderful job keeping all the characters sounding different from one another. And suspenseful until close to the end when it became clear to me who “ did it”.

This was a an excellent listen. Rich Orlow did a fantastic job of helping us feel like we were actually there. This was s fabulous story and I'd highly recommend it.

This book was worth listening too and the narrator did a good job also.

Very enjoyable & easy to listen to. A few good life lessons along with the story, great narration as a bonus.

Interesting story with positive message despite the heartbreaking events depicted within.

This started off slow but picked up once the mystery began. It’s a coming of age story with a mystery thrown in. If you like slower paced family focused stories this is a good one for that.

Got this as a free VIP book and at first thought it was not going to be very good, but as it went along it got better and better!

This is a story that stays with you. The depth and realness of the characters with all their human greatness and flaws spoke to me. Krueger's ability to tell a story full of tragedy and yet hope at the same time was reminiscent of Steinbeck's "Grapes of Wrath". It is a story of the endurability of the human spirit. The narration was also superb. This author is now on my radar as a "must read."

Excellently written. The narrator was superlative.

Very good , the kind of book that reminds you of your childhood. It draws you into the characters lives

This has been my favorite book so far! Great story and wonderful life lessons. I loved this book!

I loved the narrator, I think he did a great job in covering all the various characters voices. The book was reminiscent of TO KILL A MOCKINGBIRD, however I found the ending to be fairly predictable and flat. For some reason, I was disappointed in it. That being sad, It served me well as a great way to pass 15 hours of driving time and kept me awake and engaged.

This title is due for release on March 26, 2013
We'll send you an email as soon as it is available!