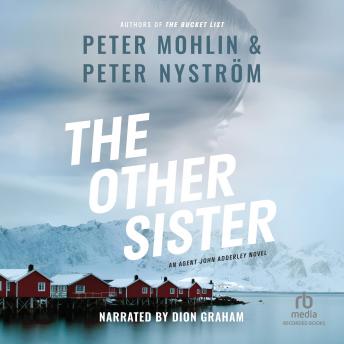 Alicia Bjelke has always been “the other sister.” She is the coding genius behind a wildly successful dating app she started with her sister, Stella, but because Alicia’s face is disfigured, she’s created a life in the background while beautiful Stella is
the face of the company. When Stella is found dead, Alicia’s life changes utterly as she becomes the focus of the investigation.

The case is assigned to former FBI agent John Adderley, living in Sweden in witness protection and battling demons from his past life. As John investigates the case, he learns that Alicia and Stella have always had a difficult relationship. The
deeper John delves into the sisters’ past, the clearer it becomes that Stella’s murder may be just one piece in the puzzle of a larger crime. As John follows the trail, the old life he thought he left behind in the States begins to catch up with him.

With a deft mix of masterful suspense and psychological depth, authors Peter Mohlin and Peter Nyström deliver a heart-pounding new entry to the John Adderley series. As with The Bucket List, Mohlin & Nyström’s award-winning
debut, The Other Sister is an ambitious Scandinavian crime thriller that is compelling, richly textured, and gripping from start to finish.

The story was a bit confusing. It probably would have made more sense if I had read the first book in the series. As it was, I didn't really understand why there was such fear of going to jail for murders committed in self defense. And would someone in witness protection be placed in a front facing, high visibility job like police detective? I thought the motivations were a bit thin but overall it was a complex and interesting read. The narrator did a great job with both male and female voices.

This title is due for release on December 6, 2022
We'll send you an email as soon as it is available!