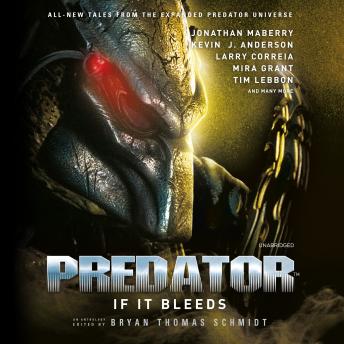 Predator: If It Bleeds

An anthology celebrating the thirtieth anniversary of the Predator franchise, If It Bleeds includes seventeen brand new, never-before-seen stories—exclusive to this collection—featuring the Predators throughout space and time. Based entirely on the original films, novels, and comics, Predator: If It Bleeds (a quote from the original movie) reveals the Predators stalking prey in twelfth-century Japan, ninth-century Viking Norway, World War I, Vietnam, the Civil War, Hurricane Katrina, and the modern day, as well as across the far reaches of future space.

Well done, excellent stories and readings. Marred only by narrator’s failure to research Portuguese pronunciation for one story.

I gave max stars cause of 3 stories. One with old guy and woman who hunted before, one with settlement on other planet and one with the Vikings which was best story. Other ones was trash sry to say.

This title is due for release on February 27, 2018
We'll send you an email as soon as it is available!