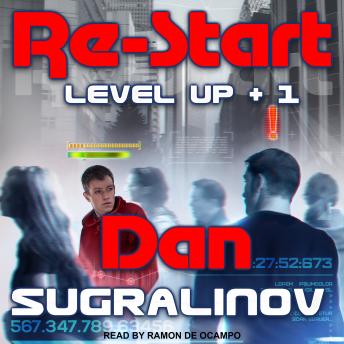 At thirty years old, Phil is an unemployed gamer who struggles to make ends meet. His only source of income is freelance writing (when he feels inspired enough to add another article to his less-than-popular blog). His wife has just walked out on him, leaving him without money, purpose, or food in the fridge.

On the day his wife dumps him, Phil receives a mysterious piece of wetware. A game interface seems to have been implanted in his brain which allows him to see the world through the eyes of an RPG player.

Now that Phil discovers his real-life stats, he can see they're far below average. With 4 pt. Agility, 6 pt. Strength, and 3 pt. Stamina, his most advanced life skill is predictably gaming.

Luckily, real-life stats can be leveled up just like virtual ones. But will it help Phil get his wife back? Can he stop being such a couch potato? Would the new game help him become fitter? Or more successful? Can his gaming skills finally come in handy in real life?

Last but not least, can he find out who could have uploaded the mysterious game to his brain? And how is he supposed to deal with this unknown but apparently omnipotent force?

wasn't my favorite series but its unique in its thinking. listed to whole series would be willing to listen to a few more..

This title is due for release on November 13, 2018
We'll send you an email as soon as it is available!