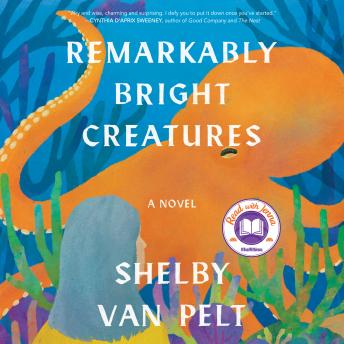 “Remarkably Bright Creatures is a beautiful examination of how loneliness can be transformed, cracked open, with the slightest touch from another living thing.” -- Kevin Wilson, author of Nothing to See Here

For fans of A Man Called Ove, a charming, witty and compulsively readable exploration of friendship, reckoning, and hope that traces a widow's unlikely connection with a giant Pacific octopus

After Tova Sullivan’s husband died, she began working the night shift at the Sowell Bay Aquarium, mopping floors and tidying up. Keeping busy has always helped her cope, which she’s been doing since her eighteen-year-old son, Erik, mysteriously vanished on a boat in Puget Sound over thirty years ago.

Tova becomes acquainted with curmudgeonly Marcellus, a giant Pacific octopus living at the aquarium. Marcellus knows more than anyone can imagine but wouldn’t dream of lifting one of his eight arms for his human captors—until he forms a remarkable friendship with Tova.

Ever the detective, Marcellus deduces what happened the night Tova’s son disappeared. And now Marcellus must use every trick his old invertebrate body can muster to unearth the truth for her before it’s too late.

Shelby Van Pelt’s debut novel is a gentle reminder that sometimes taking a hard look at the past can help uncover a future that once felt impossible.

This is one of my favorites of 2022! So heart-warming. The plot was paced perfectly. I loved the perspectives.

Could stop listening! Keeps you guessing until the end.

Both narrators were excellent. The Scottish accent done by Marin Ireland was spot on! Definitely a book I will recommend to EVERYONE! I can't wait until Shelby Van Pelt writes her next book.

I enjoyed every minute of this book. How refreshing it is to read a book without detailed descriptions of sex among the characters.

If you love Ove, you’ll love this Marcellus and Tova.

My favorite listen of the year so far!

Fantastic read! Loved the POV of the octopus done by Michael Urie was amazing and a perfect pairing of character to voice.

A beautiful charming book that touches one’s soul! I simply love Marcellous. My only criticism is with the narration of Cameron, a thirty year old guy. He consistently sounds and acts like a 17 year old. To some degree I understand this is intentional, but it would’ve benefited the character by balancing it a bit more with his actual age. Other than that, I loved the book!

This title is due for release on May 3, 2022
We'll send you an email as soon as it is available!