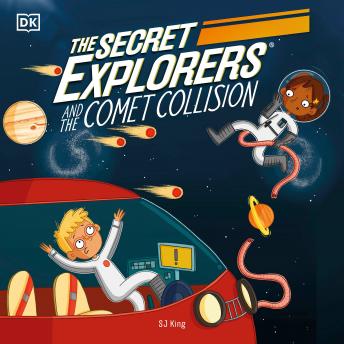 The Secret Explorers and the Comet Collision

#2 of The Secret Explorers


Get a closer look at Jupiter and its moons in this action-packed adventure story.

Blast-off into space in this second adventure with The Secret Explorers, a brand-new fiction series.

This group of brilliant kids come together from all four corners of the globe to fix problems, solve mysteries and gather knowledge all over the planet - and beyond. Whenever their help is needed, a special sign will appear on a door. They step through to the Exploration Station, and receive their mission...

In The Secret Explorers and the Comet Collision, space expert Roshni leads a mission that's out of this world - literally! With rainforest expert Ollie, she is set the task of fixing the space probe orbiting Jupiter before a comet hits the planet. With the clock ticking, it's a race against time for the Secret Explorers as they dodge asteroids, complete daring spacewalks, and use all their skills to complete their mission.

Packed with fun facts about real-life missions to Jupiter, this thrilling adventure is perfect for young readers. The action-packed narrative keeps kids engaged and makes learning about space even more fun!

This title is due for release on August 25, 2020
We'll send you an email as soon as it is available!