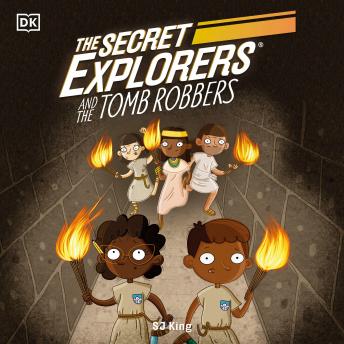 The Secret Explorers and the Tomb Robbers

#3 of The Secret Explorers

Join The Secret Explorers as they go up against thieves in ancient Egypt in the third instalment of this action-packed, fact-filled book series.

The Secret Explorers come together from all four corners of the globe to fix problems, solve mysteries and gather knowledge all over the planet - and beyond. Whenever their help is needed, a special sign will appear on a door. They step through to the Exploration Station, and receive their mission...

In The Secret Explorers and the Tomb Robbers, Gustavo (history expert) and Kiki (engineering expert) are set the mission of stopping the Cairo Museum from closing down. They travel back in time to ancient Egypt and are soon drawn into a tense, thrilling adventure that involves breaking into pyramids, learning ancient Egyptian hieroglyphics, and stopping thieves hoping to rob all the treasure from the Pharaoh's tomb.

Packed with fun facts about the real-life Pharaoh Khufu and his treasures, ancient Egyptian religion, and how mummies were made, this thrilling adventure is perfect for young readers.