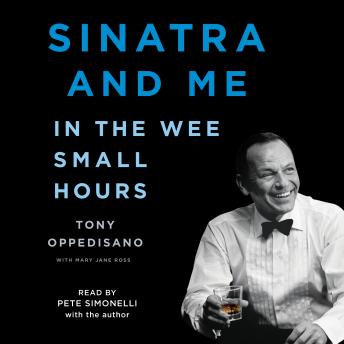 Sinatra and Me: In the Wee Small Hours

This intimate, revealing portrait of Frank Sinatra—from the man closest to the famous singer during the last decade of his life—features never-before-seen photos and new revelations about some of the most famous people of the past fifty years, including Jackie Kennedy, Marilyn Monroe, Sam Giancana, Madonna, and Bono. “If you are a Frank fan, buy this book” (Jimmy Kimmel).

More than a hundred books have been written about legendary crooner and actor Frank Sinatra. Every detail of his life seems to captivate: his career, his romantic relationships, his personality, his businesses, his style. But a hard-to-pin-down quality has always clung to him—a certain elusiveness that emerges again and again in retrospective depictions. Until now.

From Sinatra’s closest confidant and an eventual member of his management team, Tony Oppedisano, comes an extraordinarily intimate look at the singing idol that offers “new information on almost every page” (The Wall Street Journal). Deep into the night, for more than two thousand nights, Frank and Tony would converse—about music, family, friends, great loves, achievements and successes, failures and disappointments, the lives they’d led, the lives they wished they’d led. In these full-disclosure conversations, Sinatra spoke of his close yet complex relationship with his father, his conflicts with record companies, his carousing in Vegas, his love affairs with some of the most beautiful women of his era, his triumphs on some of the world’s biggest stages, his complicated relationships with his talented children, and, most important, his dedication to his craft.

Toward the end, no one was closer to the singer than Oppedisano, who kept his own rooms at the Sinatra residences for many years, often brokered difficult conversations between family members, and held the superstar entertainer’s hand when he drew his last breath.

“Frank Sinatra fans, pull up a chair and let longtime confidante and road manager Tony Oppedisano regale you with tales from the entertainer’s inner circle” (Parade magazine)—Sinatra and Me pulls back the curtain on a man whom history has, in many ways, gotten wrong.

Fantastic Book. Sinatra died while I was still in high school, so I had no pre exiting knowledge of him. That said, I listed to this book almost straight through in two days. I loved it.

This title is due for release on June 8, 2021
We'll send you an email as soon as it is available!