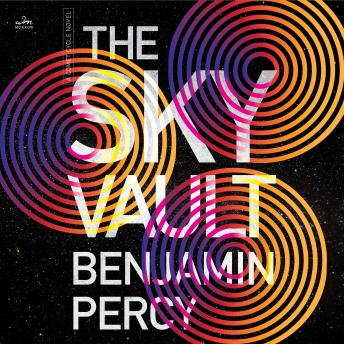 #3 of The Comet Cycle

The third book in Percy’s innovative and acclaimed Comet Cycle, The Sky Vault, follows an investigation of a mysterious weather phenomena in Fairbanks, Alaska, and a government secret buried since WWII.

The comet, Cain, came from beyond our solar system, its debris containing elements unknown. Now, in the isolated region of Fairbanks, Alaska, the skies shift and stretch as an interstellar dust cloud seeds the atmosphere. When a plane shudders its way through pulpy, swirling, bruise-shaped clouds, lit with sudden cracks of lightning, the sky opens and the aircraft vanishes…but only for a minute.

When the flight lands, everyone on board and in the community will be changed forever. This includes Chuck Bridges, a local DJ and conspiracy theorist who was on board and later reported dead to his family, but not before proclaiming that something inside the clouds was speaking to him; and now his son, Theo, must chase down answers to the mystery his father unlocked. He’ll find himself at odds with Sophie Chen, an agent with a shadowy employer desperate to secure the black box from the airplane, as well as Rolf Wagner, a widowed sheriff investigating a series of increasingly strange and unsettling reports. And then there is Joanna Straub, a contractor reconstructing a top-secret government lab active during WWII and shuttered deep within the nearby White Mountains.

The answer to the comet’s origin is about to be unveiled, and its impact on Earth is more treacherous and sublime than humanity could imagine.

This title is due for release on September 12, 2023
We'll send you an email as soon as it is available!