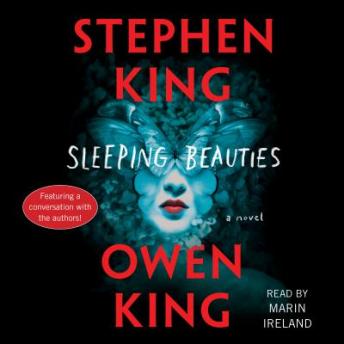 In this spectacular New York Times bestselling father/son collaboration that “barrels along like a freight train” (Publishers Weekly), Stephen King and Owen King tell the highest of high-stakes stories: what might happen if women disappeared from the world of men?

In a future so real and near it might be now, something happens when women go to sleep: they become shrouded in a cocoon-like gauze. If they are awakened, if the gauze wrapping their bodies is disturbed or violated, the women become feral and spectacularly violent. And while they sleep they go to another place, a better place, where harmony prevails and conflict is rare. One woman, the mysterious “Eve Black,” is immune to the blessing or curse of the sleeping disease. Is Eve a medical anomaly to be studied? Or is she a demon who must be slain?

Abandoned, left to their increasingly primal urges, the men divide into warring factions, some wanted to kill Eve, some to save her. Others exploit the chaos to wreak their own vengeance on new enemies. All turn to violence in a suddenly all-male world. Set in a small Appalachian town whose primary employer is a woman’s prison, Sleeping Beauties is a wildly provocative, gloriously dramatic father-son collaboration that feels particularly urgent and relevant today.

This was an amazing book! I really enjoyed it. Kept me interested. I loved the narrator. She did an excellent job, especially with all the characters. Made me feel like I was there. Two thumbs up to this book. Stephen and Owen King out did themselves. Highly recommend this book to anyone who is a serious Stephen King fan!

I was very disappointed in this book, not near enough father and way too much son. Every man in the book appears to be a character from Deliverance and SOBs on top of it. The plot moved along so s-l-o-w-l-y I almost couldn't finish it, which was bad enough, but there were too many characters to follow.

This is not your typical SK book. It's about 5 hours of interesting story and 20 hours of man hating left wing rhetoric. The Kings hit all the left's talking points though. The book is set Appalachia where, according to the Kings, every man is a homophobic, woman bashing, bigoted, coal loving, gun loving violent piece of human feces. In fact, they imply that basically all man are horrible and the world would be better off with just women. SK usually let's a little of his political ideology seep thru but to bash the reader over the head is tedious. Narrator's "white trash" accent is exaggerated and annoying.

I am a big fan of Mr.King, however, this is not one of my favorites. I found it very confusing. To many characters and names. Found it to be a bit slow.

This was my first audio book and I found the book very boring. Took me 3 months to get through it.

Decent book in classic King style. Unfortunately he allows his political views dominate at times, and classifies gun owners as backward hicks. That was rather offensive.

im glad to have tried the book by father and son and it wasn't a bad book by any means but just not my kind of weird. im used to a different level of creepy and idk its strange ill give them that I was like WOW alot but it was just not a favorite for me but it was done well anyway considering father and son being who they are it had to be hard to write together so my hats off to how well they did on writing it. I do like it better when separated better but thats just me.

The story line was pretty good, I enjoyed the story itself, however, the exuberant amount of cussing was unnecessary and actually took away from the story. Loved that the ending explained what happened to all the characters! I hate it when a story leaves you wondering what happened after the major events, but this one closed well. The narrator was fantastic!

not bad. I enjoyed the book but I thought it didn't really live up to what I was expecting

Wow. I really enjoyed this book. The whole plot and storyline were excellent. There were a few bits that didn't seem to fit into the overall story and felt like they were just added for fluff or color...or maybe to be more with the times. My only real issue with the narrator was too many characters used the same dull, heavily accented voice. It fit for a couple of the drugged-out gals, but got confusing when too many sounded just the same. I'd recommend this book to all my lady friends!

I just couldn't get into it , not sure why ? I have always found His books to suck me in right away. And then couldn't put them down . It could be because this was my first Audio Book I have tryed with Him. But I will definitely give this novel another try sometime soon.

Personally thought the book was a little strange for my liking. The beginning was a little slow the middle was great but wasn’t a big fan of the ending. Narrator did great!

I chose this book by accident...got my author's names mixed up.....BEST accident EVER!!! I was mesmerized and drawn in more than I could ever have imagined! Turns out I'm a fan of happenstance and better off for it!!????

Great book and wonderful ability of the narrator to be able to be so many characters. Nice job Marin Ireland. I will look for more books that you narrate for.

I'm not finished the book yet but i have to say its a great read or listen. My only issue is the narrator doesn't sell the African American characters well. It keeps surprising me that some of them are supposed to be black. I understand you can only do so much with the voice you are given. Otherwise i love that even with the Appalachian accent i could clearly understand what she was saying.

love this book but i love all of steven kings books

I enjoyed the book the Kong’s write like no other. While entitled to any political view. I wish they would refrain from expressing them in their work. I rather not spend my money to listen to it. Over all an excellent story narrator done a wonderful job

Loved this book! Classic king with a twist. Loved the characters and narration was great! Kept me interested the whole book through! Would love it to be made into a mini series!

Good story that kept me interested, but the narrator talked so incredibly fast that it was hard to follow, at times. I reset my device several times thinking it must have gotten into a strange mode because the pace of the reading was like listening to a record on high speed.

This title is due for release on September 26, 2017
We'll send you an email as soon as it is available!