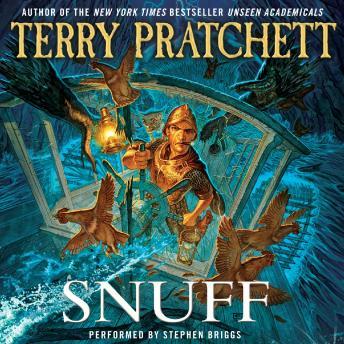 “Pratchett . . . has a satirist's instinct for the absurd and a cartoonist's eye for the telling detail.'
—Daily Telegraph (London)

Sam Vimes, watch commander of Ankh-Morpork, is at long last taking a much-needed (and well deserved) vacation. But, of course, this is Discworld®, where nothing goes as planned—and before Vimes can even change his cardboard-soled boots for vacationer’s slippers, the gruff watch commander soon finds himself enmeshed in a fresh fiasco fraught with magic, cunning, daring, and (for the reader more than for poor Vimes) endless hilarity. Did he really expect time off? As Vimes himself says in Feet of Clay, “there’s some magical creature called ‘overtime,’ only no one’s even seen its footprints.” Following the New York Times bestselling Unseen Academichals, Terry Pratchett delivers an enthralling new tale from a place of insuperable adventure: Discworld.

Discworld® is a registered trademark.

Love this series. These books are funny but also shed light on the aythors world view on people. Some just wont get it. This book in particular is very well narrated and im pleased to start my personal collection with it.

This title is due for release on October 11, 2011
We'll send you an email as soon as it is available!