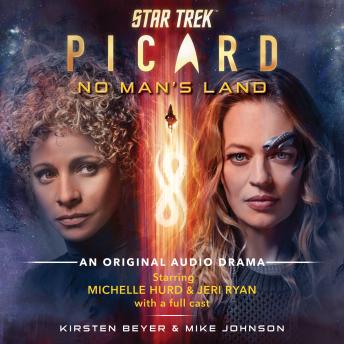 Discover what happens to Raffi and Seven of Nine following the stunning conclusion to season one of Star Trek: Picard with this audio exclusive, fully dramatized Star Trek adventure featuring the beloved stars of the hit TV series Michelle Hurd and Jeri Ryan.

Star Trek: No Man’s Land picks up right after the action-packed season one conclusion of Star Trek: Picard. While Raffi and Seven of Nine are enjoying some much-needed R&R in Raffi’s remote hideaway, their downtime is interrupted by an urgent cry for help: a distant, beleaguered planet has enlisted the Fenris Rangers to save an embattled evacuation effort. As Raffi and Seven team up to rescue a mysteriously ageless professor whose infinity-shaped talisman has placed him in the deadly sights of a vicious Romulan warlord, they take tentative steps to explore the attraction depicted in the final moments of Picard season one.

In addition to riveting performances from Hurd and Ryan exploring new layers of Raffi and Seven’s relationship, Star Trek: No Man’s Land features a full cast of actors playing all-new characters in the Star Trek: Picard universe, including Fred Tatasciore, Jack Cutmore-Scott, John Kassir, Chris Andrew Ciulla, Lisa Flanagan, Gibson Frazier, Lameece Issaq, Natalie Naudus, Xe Sands, and Emily Woo Zeller, and is presented in a soundscape crackling with exclusive Star Trek sound effects. Drawing listeners into a dramatic, immersive narrative experience that is at once both instantly familiar and spectacularly new, Star Trek: No Man’s Land goes boldly where no audio has gone before as fans new and old clamor to discover what happens next.

The cast absolutely nails it. Seven and Raffi are a great pairing with lovely chemistry. The story, however, is weak. It's a mcguffin chase for an artefact that feels like it belongs in a fantasy story rather than Star Trek. Basically, it's fine. It feels Like Star Trek characters in a bad Star Wars story. On a personal note, the villain is voiced by the actor who plays Baird in Gears of War and I found it really distracting.

I really enjoyed this story. It's an excellent interlude between Picard S1 and S2, allowing us to get to know Raffi and Seven better and get an insight into their developing relationship. A number of the supporting characters are very good additions to the overall plot too. No Man's Land gives what I hope is a sneek peak into what a Raffi-Seven spin off series might look like. Michelle Hurd and Jeri Ryan are two fantastic lead actors, who bring lots of depth to Raffi and Sevens characters, and their development as individuals and as a couple, just trying to figure it all out.

This title is due for release on February 22, 2022
We'll send you an email as soon as it is available!