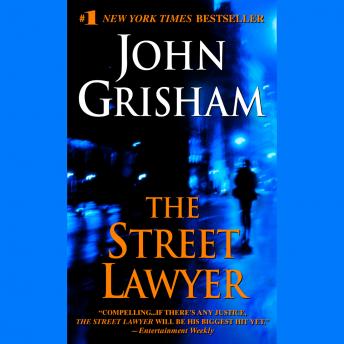 The Street Lawyer: A Novel

#1 NEW YORK TIMES BEST SELLER • Michael Brock is billing the hours, making the money, rushing relentlessly to the top of Drake & Sweeney, a giant D.C. law firm. One step away from partnership, Michael has it all. Then, in an instant, it all comes undone.

The money was good and getting better; a partnership was three years away. He was a rising star with no time to waste, no time to stop, no time to toss a few coins into the cups of panhandlers. No time for a conscience.

But a violent encounter with a homeless man stopped him cold. Michael survived; his assailant did not. Who was this man? Michael did some digging, and learned that he was a mentally ill veteran who'd been in and out of shelters for many years. Then Michael dug a little deeper, and found a dirty secret, and the secret involved Drake & Sweeney.

The fast track derailed; the ladder collapsed. Michael bolted the firm and took a top-secret file with him. He landed in the streets, an advocate for the homeless, a street lawyer.

Both read and listened to a lot of Grisham's novels, this one was kind of lack luster and a little preachy. It's not bad if you just want something to listen to but it seemed like it took a story out of the back of the newspaper and just added character development and a little more plot to it. I would say this is one of the lesser Grisham's.

Grisham will always be good. Personally, I would have preferred the unabridged version and even though this was an abbreviated listening experience, the 5 CDs masterfully presented a vivid picture of the plight of the homeless through Grisham's masterful story telling.

Loved it! Would have really liked to listen to an unabridged version because it needed a bigger transition from big time lawyer to street lawyer. But a very good listen. It certainly picked at my conscience about the homeless and how they're treated!

Another good book from J. Grisham The story flowed and was interesting to follow this through to be an advocate for the homeless. It has heart

A typical Grisham book that delves into another area of the law to enlighten those of us who are not in the business. A good story with good characters.

As an assistant in a law office I love courtroom dramas and this one had plenty drama to offer. You could really feel the pressure in each decision made by the main character. I felt as if one act by any individual really could make all the difference, either for the good or for the bad. I loved the ethical vs. unethical storyline and the acknowledgment that there are attorneys who fight for the cause, not the funds.

Overall good book and it is interesting until the last minute

i listened and read this book a couple of years ago and it is still my favorite john grisham book. there is a lot of heart in this one and the characters are so real that they come alive, if you read only one of his books make this the one. i just loved it and i have read every one of his books, i am now looking for another one and can't get enough of john grisham's writings. thank you john grisham for your fantastic imagination.

I felt less involvement with this John Grisham work than any previously. Perhaps it was my choosing the abridged verson. I shall not make that mistake again.

Really enjoyed this book!! One of Grisham's better ones. The book brought out many emotions in me including extreme sadness for the "homeless" and a renewed awareness of how fortunate we all are. I recommend this book highly.

This is the first book I listen to by Grisham. I enjoyed it.

Michael was in a hurry. He was scrambling up the ladder at Drake & Sweeney, a giant D.C. law firm with eight hundred lawyers. The money was good and getting better; a partnership was three years away. He was a rising star with no time to waste, no time to stop, no time to toss a few coins into the cups of panhandlers. No time for a conscience. But a violent encounter with a homeless man stopped him cold; his assailant did not. TOO DARN BAD PHEW

Another great story from Grisham. The narrator was great, the book was great, it just can't be any better.

I didn't care for Painted House, and, this one didn't quite measure up to the same excellence one can expect from Grisham. Yet, it was, even still, above average.

This title is due for release on July 4, 2000
We'll send you an email as soon as it is available!